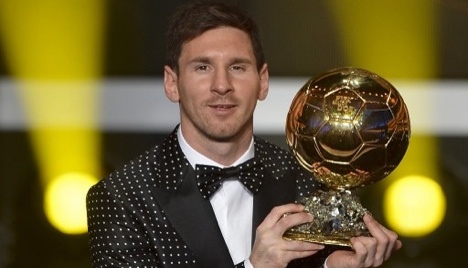 The accolade seals Messi's status as the greatest football player of his generation after he saw off Real Madrid rival Cristiano Ronaldo and Barcelona teammate
Andres Iniesta for the prize.

Messi and former French star, UEFA president Michel Platini, had prior to Monday been the only players to win three straight Ballon d'Or awards while
Dutch greats Johan Cruyff and Marco Van Basten both won the accolade on three occasions.

Messi's success crowned another landmark year for the Argentine who is already the top scorer in La Liga for the ongoing season with 25 goals, having also broken Gerd Mueller's 40-year record for the most goals in a calendar year.

He finished 2012 with an astonishing 91 goals in all competitions.

But Messi has insisted his scoring records will mean nothing if Barcelona do not go on to take the La Liga title off Real or fail to win the Champions League.

"It is incredible to receive this prize once again and it's impressive it makes it four in a row," he said.

"I would like to share this with my Barca teammates — particularly with Andres, who is here with me," said the ever unassuming superstar.

"I am also thinking of my teammates in the Argentina squad."

Beforehand he had said winning for Barcelona outweighed any personal glory.

"My goals are to win titles with the team, the Spanish league, Spanish Cup or Champions League is more important than any personal records."

"Leo's great quality is that he plays as if he is still a child," Vilanova said.

"He was always good as a youngster and you didn't need to be a coach to say that. It was a joy to see him play as a 15-year-old and that continues now."

Until he can lift top honours with Argentina, however, some observers will insist he cannot be classed as the greatest player ever, moving ahead of Pele and Diego
Maradona.