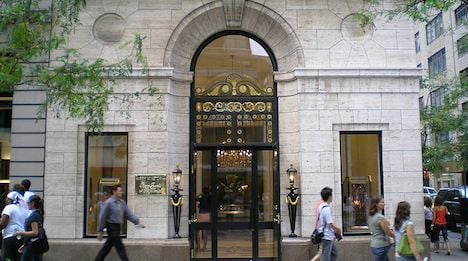 The Swiss group said it will pay $750 million to acquire the company and add a maximum of $250 million to take over its net debt.

The transaction, which still needs the go-ahead from regulatory authorities, does not include the mining activities of the Harry Winston Diamond Corporation, the company said.

Swatch said it would take over the Harry Winston brand and all the activities related to its jewellery and watches business, employing a total of  535 people worldwide.

In a statement, Swatch chairwoman Nayla Hayek said the deal made sense since "Harry Winston does brilliantly complement the prestige segment of the (Swatch) Group."

"Diamonds are still a girl's best friend," she said.

"The Harry Winston brand now has a new home that can provide the skills and support that it deserves to realize its true potential," he said in a statement.

Headquartered in New York, Harry Winston is named after its founder, an American jeweller who donated the famous Hope Diamond to the Smithsonian Institution in 1958 after owning it for a decade.

The company, which makes watches in Switzerland, was sold to Canadian owners some time after Winston's death in 1978.

Following the news, Swatch saw its share price jump 3.09 percent to 507.50 francs in midday trading on a Swiss market up 0.31 percent.

Analysts too were enthusiastic about the purchase, although they said the price was steep.

"However, I suspect Swatch Group will be able to bring profitability up toward 20 percent margin, while the joint venture in terms of sourcing diamonds looks interesting," he said.

"Overall I think it is positive."

While they seemed to agree Swatch was paying a pretty penny for the jeweller, several analysts stressed that the company based in Biel — the heart of the Swiss watchmaking industry — could afford the operation since it has more than two billion francs in cash reserves.

"We like the deal very much despite the high price," she said.

"It fills Swatch's gap in high-end jewellery… and as Harry Winston wants to expand more into watches, Swatch Group is the best solution for this," he said.

While Swatch's low-end plastic watches are perhaps its most recognizable, the Swiss company operates in every price range, from the Flik Flak kid's watches to prestigious timepieces under for instance the Breguet brand which can cost more than one million francs apiece.

Swatch's new deal with Harry Winston — one of the world's most prestigious diamond dealers — comes after it ended a partnership with luxury jeweller Tiffany & Co in September 2011.