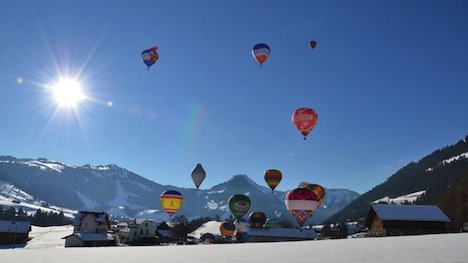 Jones, 65, will pilot one of 80 hot air balloons participating in the festival, running from January 26th to February 3rd, organizers said on Wednesday.

He is set to fly a prototype balloon, the first of its kind in the world, festival organizers said.

Small in size, it is specially designed to allow people with reduced mobility to receive training on how to fly a balloon.

Château d’Oex, in the Vaud Alps, west of the mountain resort of Gstaad, is where Jones and Piccard set off on the historic trip in the Breitling Orbiter 3 balloon on March 1st 1999.

They landed in Egypt 20 days later after a record flight of 45,755 kilometres.

Château d’Oex balloonfest organizers expect to attract 60,000 spectators this year, although the actual turnout may depend on the weather.

Last year only 15,000 attended due to poor conditions for ballooning.

Among other featured guests at this year’s festival os Géraldine Fasnacht, a snowboarder and extreme sports daredevil, who plans to perform two demonstrations of a wing suit during the first weekend.

Balloon pilots or “aerostiers” from more than 20 countries will take part in the festival, featuring flights of colourful balloons of various shapes and sizes over the Alps and Lake Geneva.

One of the highlights of the event is a sound and light show on the first two opening nights when lighted balloons take to the air.