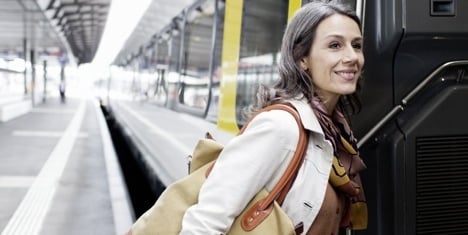 Many parts of the country have reported an increase in thefts of personal belongings on trains. In the canton of Vaud, for instance, thefts in 2012 were up 150 percent on the year before, according to Le Matin. Meanwhile, Geneva recorded a 38 percent increase, cantonal police say. And St Gallen cantonal police report twice as many cases of property lifted from train passengers in 2012 as in 2010. Public transport has become “a convenience store” for the sticky-fingered, the police chief says.

Now it seems the word has spread beyond the Swiss border.  Neil English, ski correspondent for the British newspaper Mail on Sunday, wrote a blog containing “a cautionary tale” for holidaymakers in Switzerland. English, a regular visitor to Switzerland over several decades, reports two cases of luggage theft affecting a friend and family members over the space of several months. In the more recent case, during the New Year break, his friend’s rucksack was snatched from practically under their noses.

“If, like most tourists using Swiss trains, you leave your suitcases in the luggage compartments behind closed doors at the end of each carriage, be aware,” says English. “Apparently the chancers quickly scan luggage for tags indicating foreign travellers.” Travellers to Geneva and Zurich airports are apparently most at risk, as the thieves can alight with stolen luggage at the city stop before the train moves off to the airport.

“Switzerland and the Swiss railways have one of the lowest crime rates in the world, although they are not crime-free,” Switzerland Tourism says. “So foreign tourists are always amazed when crime happens here.” The tourist promotion organisation says it hadn’t noticed any increase in complaints about crime affecting visitors.

Swiss Federal Railways (SBB) does not want to comment, except to say that rising crime is a social trend that also affects train passengers. But a leaked security report it compiled last year shows there was an 80 percent increase in reported thefts on trains in the first six months of 2012. The SBB report blames criminal gangs from Eastern Europe and North Africa for this development. The rail operator says it is spending 37 million francs annually on ensuring the security of passengers and staff.

The country’s second-biggest train operator, Bern-based BLS, says there are five to ten thefts a month on its trains, with purses, phones, handbags and luggage being the most commonly swiped items. The number of reported cases is rising, it says, with criminal bands roving the country.

Regarding the risk to tourists of having their baggage lifted, BLS admits: “In the region of Interlaken, that risk is prevalent.”

Aside from the usual advice about never leaving luggage and valuables unattended, the railway operator warns travellers to be careful in large crowds, for example, when boarding a train. “Also be careful when unknown people start talking to you,” BLS says.  “If a theft occurs inform the police. The police and BLS cooperate closely.” The company says most of its carriages have video surveillance.

Anthony Lambert, seasoned traveller and author of the book “Switzerland without a Car”, says he was “pretty horrified” by the reports of luggage theft. The fifth edition of Lambert’s guide to Swiss railways and public transport comes out in March. “For the purposes of my book I’ve travelled round Switzerland for months on end,” he tells The Local. “Some days I was on 24 different types of public transport and never experienced any trouble, so it’s very upsetting to hear in Switzerland of all countries that groups of people are targeting rail passengers in this way.”

“It is perhaps being unrealistic to hope Switzerland could escape the general trends in society,” Lambert says. “But it is disappointing, and I think that people would expect there not to be the same levels of crime in Swiss public transport.”

English, the British blogger, says the problem is the perception that, if there is any train service in the world where you can forget about your luggage until you reach your destination, it is the Swiss one. “However sad it is, we really do now need to be every bit as vigilant on Swiss trains as we are on . . . any other rail network in the world.”