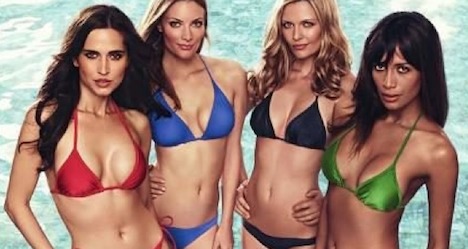 The ad shows the bosomy women standing together in the shallow end of a swimming pool wearing red, blue, black and green bikinis that match the colours of different cigar tube containers shown separately.

Beneath the photo is a slogan, which roughly translated from the German says: Variety is  pleasure (abwechslung macht freude).

Below the slogan are pictures of the cigar tubes.

Responding to a complaint brought by an unidentified party, the commission found that the image discriminated against women.

In the summary of its ruling, published on its website, the commission said the women have nothing to do with the product being promoted and are used only in an “eye-catching way”.

The women are not smoking cigars and there is “no relation between the women and the tobacco” and therefore the advertising is sexist, the commission said.

It recommended the company withdraw the advert.

The commission did not say where the advertising was shown and Villiger has yet to respond publicly to the ruling.

Founded in 1966, the commission is run by the Swiss advertising industry as a form of self-regulation meant to prevent false or unethical advertising.

The commission includes representatives for consumers and the advertising and media industries.

The body says it respects a code established by the International Chamber of Commerce and aims in part to protect consumers.

Villiger Cigars is a family-run company established in Pfeffikon in the canton of Lucerne in1888, where it is still headquartered.

The company says that it produces 1.2 billion cigars a year.

An image of the full advert can be seen below: