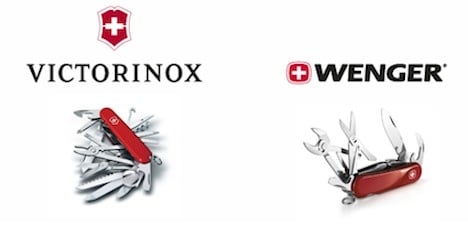 Wenger, based in the Delémont valley in the canton of Jura, was taken over in 2005 by Victorinox, its larger and older family-owned rival, based in Ibach, in the central Swiss canton of Schwyz.

Victorinox, famous for its own Swiss Army brand, said its decision to integrate the Wenger knife business “eliminates duplication in the product range, responds to increased market demand and strengthens its competitive position internationally.”

The company said the decision would not affect any jobs at Wenger, which employs 248 people worldwide, including 193 people in Switzerland.

Wenger will continue producing knives under the Victorinox brand.

“The Swiss Army knife was not differentiated for the consumer abroad — we had to fix that confusion,” Urs Keiser, spokesman for Victorinox, told The Local on Thursday.

Keiser said the company faced competition with other categories of products “to maintain shelf space” in stores and having two Swiss Army brands was a problem.

"Both brands build on the same heritage of the Swiss Army Knife," he said.

“Many consumers can hardly distinguish between the knife products from Victorinox and Wenger and the global fight for survival is getting increasingly fierce,” Carl Elsener, CEO of Victorinox, said in a statement.

“That's why we are joining forces and focusing on one brand: Victorinox."

Victorinox, which employs 1,900 people, has up until now operated Wenger as a stand-alone entity.

The company in Ibach, founded in 1884, is the “original inventor of the Swiss Army knife,” Keiser said.

It produces 25 million knives a year compared with 2.2 million produced by Wenger, he noted.

In addition to the famous varieties of Swiss Army knives (still used by Switzerland’s military), Victorinox produces a wide array of kitchen knives and cutlery.

For these products it faces competition mainly from Germany and Asia, Keiser said.

Counterfeit Swiss Army knives are produced in Asia but they account for less of the competitive pressure than the quality issue, he indicated.

Victorinox said it will continue to operate the Wenger site in Delémont, with all knives being produced there rebranded under the Victorinox name.

Wenger’s watch and licensing business will continue, however.

"We regret of course that we will no longer be producing Wenger knives in the future,” Peter Hug, CEO of Wenger, said in a statement.

“The concentration of forces will allow the group to grow within the global competitive environment, to enhance the product range and to strengthen the Delémont site in the long term.”

Keiser added that with regard to employment, Victorinox’s goal was to “maintain and create jobs — this reflects the company's phliosophy".