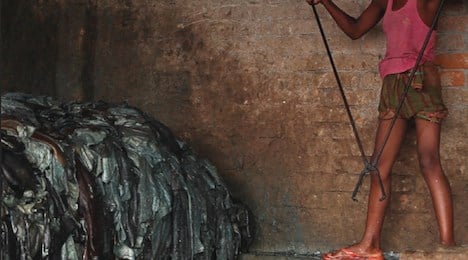 The retailers acted after tests conducted for a consumer TV show to be aired on Friday by RSI, the Italian-language Swiss broadcaster, found the presence of chromium 6 in 14 pairs of shoes, the ATS news agency reported on Thursday.

The tests were conducted on 21 pairs of shoes on sale in Ticino, Switzerland’s Italian-speaking canton, for RSI’s “Patti chiari” programme.

The results come after a French-language TV consumer programme, broadcast in Switzerland last month, also raised concerns about the presence of chromium 6 in shoes and other leather goods produced in Bangladesh. [See Bata's response below]

Chromium 6 is a toxic chemical byproduct of chromium, widely used to tan leather.

In shoes, the chemical can provoke allergies and chronic dermatitis, according to experts.

Bata and Vögele said they withdrew the suspect models from their stores starting on February 13th, ATS reported.

The retailers have ordered further tests and until definitive results are obtained the shoes will remain off the market, the news agency said.

Both shoe companies make a point on their websites of highlighting codes of ethics, including measures to ensure that footwear is produced in a safe manner with good working conditions for employees.

Human Rights Watch, an international NGO with offices in Geneva and Zurich, issued a critical report in October 2012 about Bangladesh’s “toxic tanneries”.

Most of them are located in the city of Hazaribagh, home to 150 tanneries employing 8,000 to 12,000 people, including children as young as seven and eight, the report says.

In peak periods up to 15,000 people can be employed in a highly polluting industry where employees are exposed to hazardous chemicals that cause skin diseases and other illnesses, the NGO said.

Chromium 6 when inhaled can cause lung cancer, while contact with the chemical can cause dermatitis and skin ulcers, Human Rights Watch said.

"Regarding the recent “cases” of Chrome 6 found in Bata shoes in Switzerland: The TV station only mentioned that traces of Chrome 6 were found without stating the amount.

"Bata is committed to the highest standards for qualitative manufacturing processes and requires from its suppliers to comply with the REACH Regulation of 3mg/kg for Chrome 6.

"All products supplied within Europe must be compliant with this European Community Regulation.
"Furthermore, the Bata Environment, Health & Safety Specifications Policy sets standards within the footwear industry.
"I would like to submit the tests, including the ones from the TV stations.
"Bata complies with the REACH Regulation.
"Second, none of these shoes are coming from Bangladesh. They were manufactured in Italy, China/Vietnam and Bulgaria."

The talks came after a building housing garment factories collapsed in Bangladesh in April, killing more than 1,100 people.

They were aimed at agreeing compensation for the families of those victims and those of other factory disasters.

The disaster placed the international spotlight on the often appalling conditions and the lack of rights for workers at the country's 4,500 garment factories, and retailers responded with a pledge to improve safety.

But the campaign groups that organized the meeting said only around a third of the firms invited had even turned up, with key names including Walmart, Benetton and Mango staying away.

Primark was the only clothing retailer to make a concrete commitment at the meeting, vowing to provide a further three months salary to families affected by the Rana Plaza factory collapse.

The 11 brands that made an appearance were mainly European and also included Bon Marche, Camaieu and Store Twenty One.

"We are disappointed that they didn't commit to an amount," said Ineke Zeldenrust, international coordinator at the Clean Clothes Campaign.

"We had hoped to achieve much more."

Organizers, said $74.57 million would be needed to compensate the Rana Plaza victims for their suffering and lost income.

Another $6.44 million would be needed for the victims of a deadly fire that killed 112 workers at the Tazreen Fashions factories outside Dhaka in November, they said.

Bangladesh is the world's second biggest apparel exporter, with its garment factories accounting for 80 percent of its overseas shipments.

But the industry has been hit by a series of recent disasters highlighting appalling safety conditions at many factories.

In July Bangladesh approved a new labour law to strengthen employees' rights and improve workplace safety, in response to the Rana Plaza collapse.

"Consumers will be shocked that almost a half-year has passed since the Rana Plaza disaster with only one brand so far providing any compensation to the disaster's victims," IndustriALL assistant chief Monika Kemperle said in a statement.

New meetings would take place with retailers within the next two weeks, organizers said.