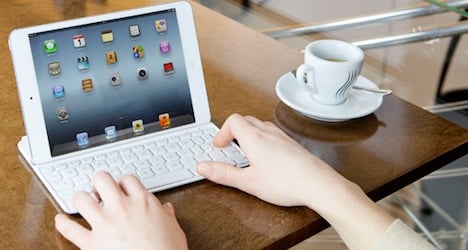 Logitech is counting on such products as its thin keyboard attachment for iPads to revive sales. Photo: Logitech

The redundancies amount to five percent of the company’s workforce, it said in a news release issued on Thursday.

Logitech, with headquarters in Morges in the canton of Vaud and in Newark, California, said it expects to record a pre-tax cash charge of around $12-14 million in the fourth quarter of its fiscal 2013 year to deal with the staff reductions.

The company did not say how many jobs would be affected in Morges.

The job cuts follow a restructuring plan announced in April 2012 that aimed to cut $80 million in annual operating costs.

“As we align the organization with our strategy to become a faster, more profitable company, we have also created opportunities to become more focused, improve operational effectiveness and even deliver additional cost savings that will contribute to improved profitability,” Bracken P. Darrell, Logitech president and CEO said in a statement.

“These actions support our goals to develop outstanding mobility- and PC-related products, streamline our cost structure and achieve faster times to market.”

Last month the company announced it was selling its Harmony division, which produces remote control devices, after posting an operating loss of $180 million for the third quarter of fiscal 2013.

Sales for the quarter dropped 14 percent to $615 million.

The company, known for its computer mice and keyboards, has struggled as the market for personal computers has declined worldwide.

Logitech is trying to focus more on accessories for mobile devices such as tablets and smartphones.

The company also said it planned to discontinue “non-strategic” products such as speaker docks and console gaming by the end of the year.