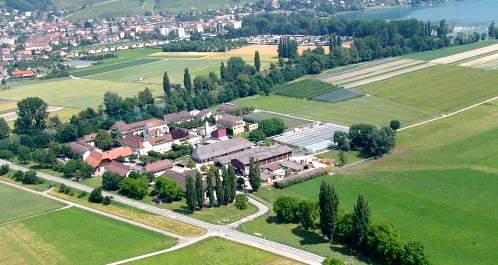 An aerial view of the detention centre. Photo: be.ch

The man, who was being prepared for his freedom with therapy and day-release, absconded as he and his warder were leaving a shop, Swiss tabloid Blick reported.

The paper says there have been a number of incidents in recent years of prisoners escaping from the institution run by the canton of Bern.

St Johannsen is a therapeutic centre for convicted criminals with psychiatric disorders. Prisoners are sent there to prepare for release into society.

Blick said the man had not been named but its research had shown it was child killer René G, who was sentenced to eight years prison in 1999 for killing his four-month old son.

According to police sources, the man had been detained at St Johannsen since November last year.

The prison warder grabbed hold of his arm and tried to pull him back,” the paper quoted jail director Manfred Stuber as saying.

The man is said to pose “a high risk to public safety”, according to psychiatric reports.