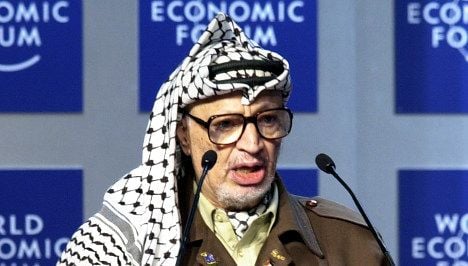 It's thought Arafat could have been poisoned. Photo: World Economic Forum

"There are two series of tests that have to be carried out. The first one is complete and we're going to start the second one, so there won't be any tangible results until the end of May," said Darcy Christen, spokesman for the Swiss University Centre of Legal Medicine in Lausanne.

In December, Professor Patrice Mangin, the centre's head and the man in charge of the tests, said the findings were expected within three or four months.

Christen explained that the delay was also due to a need to analyse the results in detail, then write an official report and submit it.

Arafat died in November 2004 in a French hospital, and there have been repeated claims that he was poisoned.

Last November, his body was exhumed from his grave in the West Bank city of Ramallah, enabling experts to take some 60 samples from his remains.

The samples were distributed among three teams doing separate analyses: the Lausanne lab, a French team carrying out a probe at the request of Arafat's widow Suha, and Russian experts appointed by the Palestinian Authority.

The investigations were launched after the Lausanne lab found abnormal traces of the radioactive substance polonium in Arafat's personal effects, which were examined at his widow's request.

There is no contact between the Swiss, French and Russian teams, Christen noted, underlining that the choice was deliberate to ensure the independence of their findings.

The Palestinian Authority has said it will petition the International Criminal Court in The Hague if proof is found that the veteran leader was poisoned.