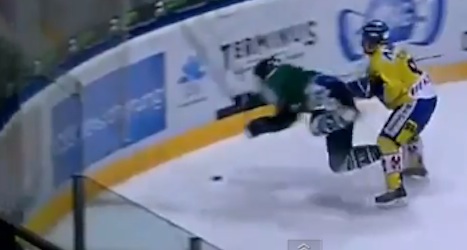 Screenshot of YouTube video showing Keller being rammed into the boards.

EHC Olten said that defence man Ronny Keller, 33, was not set to recover from the injury he suffered in Tuesday night's semi-final match at home to regional rivals Langenthal.

The grim diagnosis came from Switzerland's specialized paraplegic clinic, which operated on Keller in the wake of the shock body check by Langenthal right-wing Stefan Schnyder.

"As a result of a serious injury to his fourth dorsal vertebra, Ronny Keller will remain paraplegic," Olten quoted the clinic's chief physician Michael Baumberger as saying.

The club said that Keller had not suffered brain damage and was due to be released from intensive care soon.

"He's awake, able to speak normally and has been informed of the results of the accident," they said.

In a statement, the country's national federation Swiss Ice Hockey said it was "overwhelmed" by what had happened to Keller.

"He is in all of our thoughts, as are his family and friends," it said.

Schnyder's check shocked fans used to the tough world of ice hockey, with television footage snowballing across the Internet.

The 29-year-old Langenthal player closed in on Keller's left, before crashing into him with his chest and then ramming him headlong into the rink boards.

Keller, who remained prostrate on the ice, told officials he could not feel his legs and was evacuated to the clinic by helicopter.

The Swiss league has opened a disciplinary case against Schnyder.

Whatever the outcome, he will not play for the remainder of the season, Langenthal said.

Speaking to the newspaper Blick before Keller's diagnosis was announced, Schnyder said he regretted what had happened and hoped the player would recover.

"I only wanted to get to the puck before him. I'm haunted by the scene and I feel bad about this," Blick quoted him as saying.

Langenthal later said Schnyder was deeply upset, would not be talking to the media and was receiving counselling.

They also expressed their deepest sympathies to Keller and his family.

Emmanuel Favre, chief sports editor of the daily Le Matin, said Schnyder could not have been unaware of the danger of his challenge.

He said tough sanctions were needed to calm "hotheads" in the Swiss game, notably during the tense play-off season, as the likes of Olten and Langenthal battle to reach the first division.

"But those to blame aren't just on the ice. Coaches, whose reputation is made and broken by their results, don't always measure the impact of their team-talks," Favre wrote.

"Ice hockey is, and always will be, a contact sport," he wrote.

"There will always be charges and injuries.

"But with a little bit of goodwill and a decent dose of respect — something that's cruising to extinction in the game — it would be possible to avoid tragedies like that in Olten."