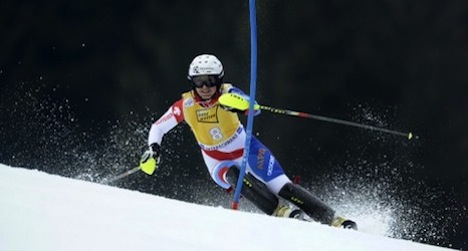 Slovenia's Maze was the fastest over the two runs with a winning time of one minutes 52.85 seconds with Holdener at 0.25 seconds back and 17-year-old American Mikaela Shiffrin, the world
slalom champion, at 0.75 seconds off the pace.

Olympic slalom champion Maria Hoefl-Riesch of Germany failed to finish her fourth consecutive slalom after missing a gate on her first run.

The second-place finish for Holdener marked a breakthrough for the 19-year-old native of the canton of Schwyz, who made her debut on the World Cup circuit in October 2010

Maze won her 22nd podium placing of the season and saw her take over from Shiffrin at the top of the slalom ranking table.

The Slovenian has seven more points with one race left.

This was Maze's second slalom victory of the season after winning in Maribor, Slovenia in January.

She is only the third woman to have won in all five alpine disciplines in a single season.

With US ski star Lindsey Vonn out injured, Maze, 29, now has a record 2254 World Cup points this season, having already broken Hermann Maier's 13-year-old record of 2000 which the Austrian set in 2000.

The season concludes with the World Cup finale in Lenzerheide, Switzerland, which starts Wednesday.

Maze is hoping to finish with six titles having had her overall World Cup win confirmed in Meribel, France a fortnight ago.

Smith finished ahead of Canada's Marielle Thompson and Ophelie David of France.