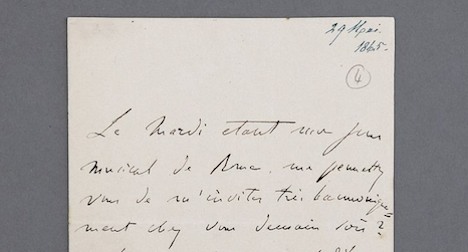 The letters, put on public display on Friday at the Hôtel des Ventes auction house, are to be sold on Wednesday.

In the manuscripts, Liszt wrote of his friendship with German counterpart Richard Wagner and Franco-Polish romantic icon Frédéric Chopin, to whom he dedicated three musical scores.

He also criticizes certain sections of his era's public for failing to appreciate his work.

Also up for sale is an eight-page, handwritten booklet of piano exercises composed by Liszt for his pupil Valérie Boissier in 1832.

The lots are part of a broader sale of musicology items, including manuscripts, scores and photographs related to Bela Bartok, Paul Dukas, Nikita Magaloff, Igor Stravinsky, Joseph Szigeti, and Wagner.

The items up for sale are from two private collections.

One is from the family of Szigeti and Magaloff, who was his son-in-law, while the other was put together by Genevan musicologist Robert Bory.