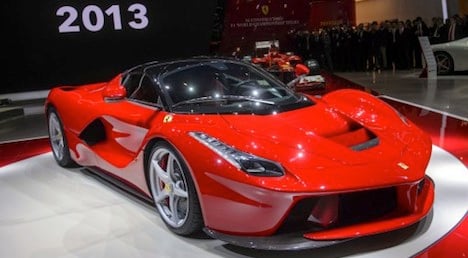 LaFerrari, one of the brawny super-cars in the limelight at this year's Geneva motor show. Photo: Fabrice Coffrini/AFP

"In super-luxury, there is still a tendency to try to reach new speed records," explained German car specialist Stefan Bratzel.

Judging from the models unveiled in Geneva, horsepower wars still have plenty of road ahead of them.

Italian Lamborghini, celebrating its 50th anniversary, unveiled its Veneno (Spanish for poison) model — a name that hints at the warrior nature of the sleek machine.

With 750-horse power under the hood and a whopping price-tag, the car turned more than a few heads at the show.

Only three models of this bundle of concentrated technology have been made, and each has already been snapped up for a staggering 3.0 million euros ($3.9 million).

Accelerating from 0 to 100 kilometres an hour in just 2.8 seconds, and with a top speed of 355 kilometres (220 miles) an hour, the car is the fastest non-racer ever built by Lamborghini, company chief Stephan Winkelmann said.

Ferrari's brand new hybrid supercar, LaFerrari, is another big attraction at the show.

Car enthusiasts need a fair dose of patience to catch a mere glimpse of the dream machine, made by Italy's Fiat.

But once through the crowd, the firy red descendant of Ferrari's famous Enzo is a heart-stopper, especially with its promise to go from 0 to 200 kilometres an hour in less than 8.5 seconds.

It has two engines: one electric and one a thermic 12-cylinder, allowing it to boast 963 horsepower at short distances.

The 499 LaFerraris made have already found buyers, each willing to pay more than one million euros to call the luxury speed dream their own.

LaFerrari's biggest rival on the floor is called P1.

The bright yellow model with butterfly doors was built by British McLaren, and is sold for the same price as its Italian competitor.

Only 375 of these cars, which also have two engines and promise 916 horsepower, are slated for production.

Boasting 633 horsepower, it aims for high-speed performance and is clearly aimed to take on Bentley's Continental GT.

The Wraith is the most powerful car to ever come out of a Rolls-Royce plant, the carmaker said.

With its generous curves and luxurious passenger compartment, it will go on sale in Europe at the end of the year for 245,000 euros.

Right across from it, Bentley showed off the Flying Spur, which with a 625 horsepower is presented as the fastest four-door model ever to come from the carmaker.

The golden racing sedan is soon to go on sale for just under 200,000 euros apiece.

Lifted by the swelling US market and a dynamic Asia, the luxury segment appears to have easily withstood last year's European crisis, and continues to push out superlative-laden press releases.

"The race for power is not over yet" at Ferrari and others, said Polk analyst Bertrand Rakoto.

Some carmakers are meanwhile trying to innovate and broaden their product portfolios.

Germany's Porsche, for instance, can thank its Cayenne SUV for spurring a spike in the brand's sales.

Bentley for instance aims to launch one in 2015 and Lamborghini expects to do the same by 2017.

They are both waiting for a green light from their German parent company Volkswagen.

Rolls-Royce is also looking at the segment, and Fiat's Maserati is planning to broaden its offerings with a small cross-over as well as a small sedan by 2015.