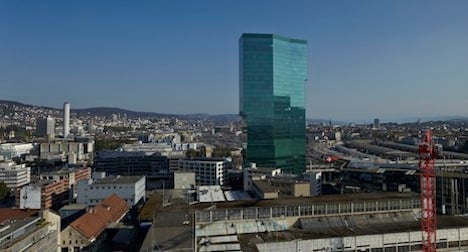 Employees had to leave the 36-storey Prime Tower after a blackout occurred shortly before 3pm, the ATS news service reported.

An electrical cable was severed at a construction site in Zurich West, where the high-rise tower is located, leaving 3,600 homes, offices and businesses without power, a spokesman for Zurich utility EWZ said.

It took 20 minutes to get people out of the 126-metre high building using the stairs in an emergency process that appeared to go smoothly, according to an online report from Tages Anzeiger.

Lights and computers went out in the building and some people got briefly stuck in an elevator, the newspaper reported.

An employee from the Schindler lift company was able to free the trapped victims after 15 minutes, the paper said.

Evacuees gathered in the plaza outside the building  but power was not restored by the end of the working day.

The blackout shut down trams and trolleybuses operating in the neighbourhood, a former industrial area being redeveloped for offices and condos.

Power was restored to the area at 6.40pm, EWZ said.