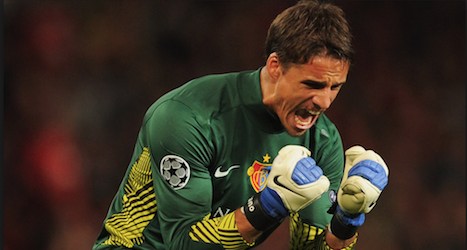 Basel went into the game with a two-goal advantage from the previous game in the best of two series.

But Zenit’s Axel Witsel headed the ball into the back of the net from a corner after 30 minutes creating high drama for the penalty kick awarded in the 86th minute.

Roman Shirokov failed to get the ball past Sommer who blocked the kick with his foot after diving the wrong way, to the delight of Basel fans.

The Swiss team was playing with just 10 men in freezing cold conditions after Mercelo Diaz received a red card from the referee.

“I am not the hero of the night,” Sommer modestly insisted at the end of the game.

With the 1-0 result (2-1 in Basel's favour for the two games), the Swiss team is now set to play England's Tottenham Hostpurs.

This marks the third time the Basel team has made it into the final eight of a European football competition.

Previously the team made the quarterfinals of the 1973-74 European Cup and more recently the 2005-06 UEFA Cup, forerunner of the Europa League.

Basel found out on Friday afternoon that they will meet Spurs in the quarterfinals after a draw held at UEFA’s headquarters in Nyon, in the canton of Vaud.

Meanwhile, luck almost ran out for the Basel team on the return from Russia.

The Hamburg Airways Airbus 320 plane they were flying in was forced to return to the St. Petersburg airport after a technical problem with the landing gear.