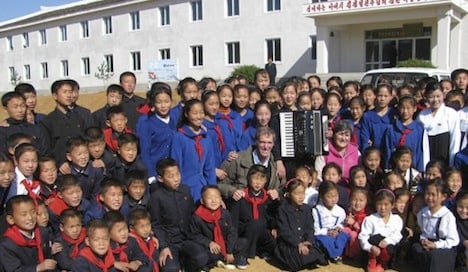 Christopher Carpenter, 73, who used to head the UN refugee agency in Vietnam, began building schools in North Korea in 2008. "It wasn't really my idea. The North Koreans contacted me out of the blue by email in 2007," Carpenter told AFP in Switzerland.

His charity, the Foundation for Microprojects in Vietnam-DPRK, is registered in Crassier, a small community near Nyon in the canton of Vaud. The organization had been financing schools and other projects in Vietnam since 2000, and the North Koreans asked Carpenter if he would do the same there.

Typhoons had destroyed many North Korean schools, built with mud and hay instead of cement, and Carpenter's foundation agreed to help, becoming one of few independent aid groups in the country. North Korea's hardline communist regime has been pilloried for prioritising its nuclear programme and military over providing basic necessities.

Carpenter acknowledged he could be accused of filling in where the regime is failing its people. "But the fact is they're not doing it and the people are suffering the consequences."

Even though the North Koreans approached him, Carpenter says they initially barred him from the country. "They had difficulty with my passport in the beginning," he said, so his French colleague Catherine Bertrand undertook the initial visit in February 2008.

Also a retired UN representative, Bertrand, 67, was taken to the remote southern Kangwon Province, where she found a school on the verge of collapse teaching students in sub-freezing temperatures. "The kids were so cold they couldn't move," she said.

When the new school opened the following November, Carpenter was allowed in. He has made four trips since, with another planned in October. "We have never encountered any hostility," he said. The North Koreans know he is there to help and have decided to trust him, Carpenter believes.

The foundation has built six middle schools, each for around 300 students, and has three more under construction. Carpenter and Bertrand inspect all sites before and after the schools are built and pay no more than $40,000 per project, with the state usually pitching in around $25,000. "There's no doubt in my mind that they're using the money properly," he said, pointing to the inspections and detailed financial reports.

'To teach propaganda, you have to teach them first how to read, write and count'

In its first education reform in four decades, Pyongyang announced last September an extension of compulsory free education from 11 to 12 years. Carpenter acknowledges that children are openly taught propaganda in the schools he funds, but stressed that "they also study other subjects like English, math . . . and art."

Bertrand maintains that the schools are, paradoxically, a rock-solid investment. "You know it will be filled with children and teachers… for propaganda," she said,  but "to teach propaganda, you have to teach them first how to read, write and count."

The two describe friendly relationships with the North Koreans they work with, and while they must request permission for every move they make, it is usually granted. They believe this has given them a glimpse of life beyond the official facade. They have, for instance, driven on the cross-country, almost empty eight-lane highway at night and seen people walking along the side of the road, "like ghosts, in the dark, in minus 15-degree weather," Carpenter said.

He also describes extreme poverty and houses with cracked windows in the dead of winter, but says that, from what he has seen, people seem to have enough to eat. That is not the view of the UN, however, which says two-thirds of the country's 24 million people are chronically food insecure. Pyongyang has repeatedly turned to the international community for food aid amid intermittent famines since hundreds of thousands died in a severe famine in the 1990s.

Carpenter almost fully funds the North Korean projects himself, and laments the difficulty of convincing donors to pitch in. People "don't see the human angle (or) the hardship," he said. "North Koreans are human beings who laugh and cry like people everywhere," he said, describing people with a "good sense of humour" who are curious about the outside world.

Shortly after the 2008 US elections, for instance, he had mentioned that Barack Obama was the first black US president. "They said: 'What do you mean black?' They had heard his name but had never seen a photograph of him!"

The country has responded to the sanctions and joint South Korea-US military manoeuvres with threats to unleash a second Korean War — backed by nuclear weapons. "There needs to be more communication at all levels between North Korea and the rest of the world to somehow release the pressure that is building up," Carpenter said.