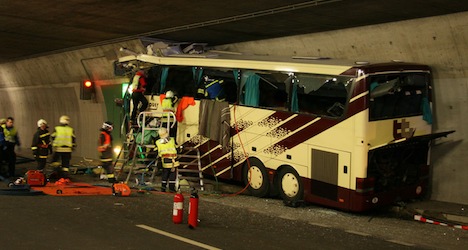 A total of 339 people lost their lives on highways in 2012, 19 more than the previous year, the federal roads office (OROU) said in a report.

The number of seriously injured victims declined to 4,202 from 4,437, the report said.

The increase in fatalities is in part due to the crash of a Belgian bus that killed 28 people, including 22 children, and injured 24 in Sierre, in the canton of Valais, on March 13th 2012.

The children were returning from a ski trip in the Valais Alps.

More than a year later, the cause of the accident remains unexplained.

While the bus crash inflated the overall number of fatalities, the death toll for the first six months of 2012 of 166 was only three more than for the first half of 2011.

The number of highway deaths in Switzerland has steadily declined from more than 1,700 in 1971 to a level below 400 for the past five years.

Young people aged 15 to 19 represented the biggest category of motor vehicle accident victims followed by those in the 45 to 49 age group, the OROU report said.

Men are held responsible for causing 70 percent of the accidents causing death or injury last year involving all categories of vehicles, according to the report.

Men caused close to twice as many car accidents as women, although male drivers drove on average 150 percent more than their female counterparts.

The single biggest cause of accidents involving men was the influence of alcohol, accounting for ten percent of crashes.

In the case of women, failure to yield the right of way was the biggest factor in accidents, accounting for 11 percent of cases.