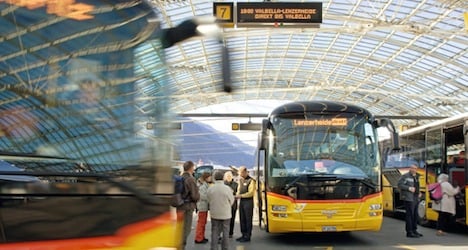 Drivers arrived at the Swiss capital in yellow coaches from all over Switzerland to decry what they termed wage discrimination.

Employees of private companies contracted to provide services for PostBus say they should receive the same pay as drivers working directly for the state-owned post office.

“The post office must now prove that it is a socially responsible employer,” said Reto Rosselli, a driver from Ticino said in a statement issued by the group.

“It is inadmissible that PostBus allocates concessionaire routes to subcontractors and that it demands contractually that these (companies) hire drivers under conditions that are worse than those of (PostBus),” Rosselli said.

The drivers placed a chair symbolically in front of SwissPost’s headquarters in Bern, the ATS news agency reported.

The chair is to remind Daniel Landolf, the head of PostBus, that he can no longer turn a “deaf ear” to the legitimate demands of the drivers, the group said.

Landolf did not immediately respond.

Meanwhile, 20Minutes reported online that PostBus is severing a contract at the end of this year with its biggest subcontractor, a company that operates 50 buses in the canton of Vaud.

But PostBus, which owns a third of the company, has decided to provide the service differently, 20Minutes said.

That is putting the future of 60 drivers for SAPJV in question.

The Mayor of Cossonay, a community served by the bus service, resigned as chairman of SAPJV, complaining that PostBus (known in French as CarPostal), was trying to kill the company, 20MInutes reported.

PostBus for its part said SAPJV’s services had become “unsatisfactory and too expensive”, the news site said.

According to SAPJV, however, it was not being paid sufficiently for the services demanded.

After the company sought an advance of 30,000 francs last year, PostBus decided to terminate the contract, 20 Minutes said.

PostBus Switzerland directly or indirectly operates around 800 bus routes with more than 2,100 buses in Switzerland, carrying more than 120 million passengers a year.