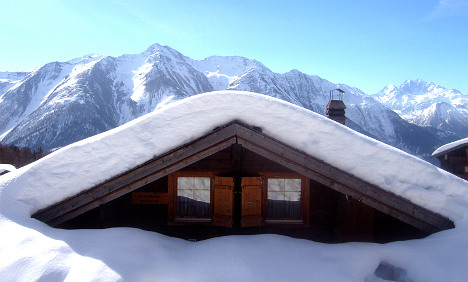 A Credit Suisse real estate report says that thanks to interest rate reductions the annual financial cost of owning your own four walls is lower than ever — despite purchase prices going through the roof in some regions.

Lake Geneva and greater Zurich remain the most expensive areas for buying, with the situation particularly critical in the canton of Geneva, according to Credit Suisse. There, property prices have risen more than twice as fast as incomes. And overpricing is starting to spread to regions of Vaud situated away from Lake Geneva, as well as the canton of Fribourg, the bank warns.

Growing demand for real estate has led to housing bubbles in popular areas of the country, a separate study by Comparis.ch and ETH Zurich has found. Eleven districts on the periphery of population centres are showing signs of prices reaching unsustainable levels, it says. These include Monthey in Valais, the Jura-Nord district of Vaud, Lenzburg and Baden in Aargau, and Locarno in Ticino.

“In these areas it’s advisable not to buy at present,” Felix Schneuwly, head of public affairs at Comparis.ch, tells The Local. “If you can, you should wait one or two more years until the bubble dissolves.”

However, in seven other districts a housing bubble that developed in 2011 dissipated in 2012, according to the Comparis analysis of house and apartment listings. These districts include Zug, Dietikon and Lausanne. “In 2012 the prices in these areas didn’t rise and in some cases they even fell. So there are good opportunities for buyers here,” Schneuwly says.

But even if the opportunity seems too good to pass up, there are factors that may discourage many potential buyers. Not least, according to Credit Suisse, raising the required equity and meeting mortgage lenders’ affordability criteria.

Sjoerd Broers, managing partner at Auris Relocation in Zurich, says expats in particular may underestimate the cost involved in buying. “They need at least 20 percent of the cost, and they cannot finance this from their pension fund because if they’ve just arrived in the country they haven’t paid into it yet,” Broers tells The Local.

Adding on notary fees and other charges, the total cash needed is at least a quarter of the property price, according to Sabine Baerlocher, manager and owner of Active Relocation, a Geneva-based company that helps around 200 expat families every year with their move to Switzerland. “Due to the financial crisis, what people have to understand is that the banks are very cautious,” Baerlocher tells The Local.

“Most banks, if someone is interested in buying a house for two million francs, will estimate its worth in reality at 1.8 million, and they won’t give the 80 percent mortgage on the two million that is asked and that the person is willing to pay. So many times you need more than the 25 percent,” Baerlocher says.

Both Broers and Baerlocher give the same advice to expats on arrival in Switzerland: don’t rush into buying. It’s easier to get out of a rental agreement than to resell a property. “Buying is a long-term decision, therefore it’s a decision you take more slowly,” Baerlocher says.

One British national known to The Local wants to buy but is still renting 14 years after moving to Switzerland. She and her family are about to move to their third canton. “We haven't yet bought a property in Switzerland as we still don't know where we want to settle,” she says. “We wanted to move quickly, so we decided to carry on renting."

For American expat Sue there is no question of buying. “We rent in Switzerland because we don't want the long term commitment of living here for the rest of our lives,” she says. “I may dream of owning a home here with beautiful mountain views and a waterfall in the back yard, though!”

Expats not planning on staying more than five years are better off renting, the relocation experts agree. And although immigration is continuing to feed the demand for rental accommodation, there is a lot more on offer than there was a few years ago. “With the right approach and help it’s always possible to find somewhere,” says Baerlocher.