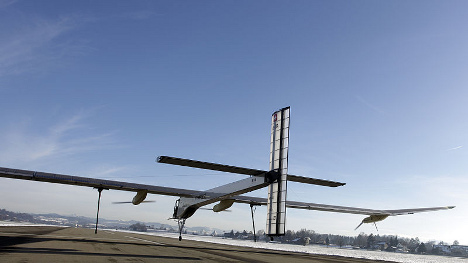 The experimental Solar Impulse plane, which has made several trips since its maiden flight in 2009, will take off on May 1st on a transcontinental tour split in five stages.

"We are ready to do this flight across America," said Solar Impulse co-founder Andre Borschberg during a press conference at a hangar in Mountain View, near San Francisco.

Borschberg said the flight is being split into multiple stages for security reasons, emphasising nevertheless that the single-seat aircraft was technically capable of flying non-stop across the United States.

A non-stop flight would take approximately three days travelling at the aircraft's cruising speed of around 43 miles (70 kilometres) per hour.

"We have limited ourselves to fly a duration maximum of 24 hours," said Borschberg, who will share the piloting duties with Solar Impulse president Bertrand Piccard.

Weather conditions permitting, the Solar Impulse will take off on May 1st and is scheduled to make stops in Phoenix, Dallas and Washington before arriving in New York in early July.

The plane will spend up to 10 days at each stop on its journey in order to showcase its technology to the public, schoolchildren and students who will also have a chance to talk with the pilots.

"The people will be able to follow the mission, to speak to the pilot, to ask questions," Piccard said.

"We would like to inspire students, schoolchildren, inspire as many people as possible to try to have the spirit to dare, to innovate, to invent."

The Solar Impulse project was launched 10 years ago before the plane, which weighs about the same as a family car but boasts a wingspan roughly equivalent to a Boeing 747, made its first flight in 2009.

In 2010, the plane was flown 26 hours non-stop in order to demonstrate that its photovoltaic cells could soak up enough solar energy in daytime to power the plane at night.

A year later, the plane made its first international flight between Belgium and France before it set off on a 1,550-mile intercontinental flight from Madrid to Rabat in June.

Borschberg and Piccard are planning an around-the-world flight of the plane in 2015.