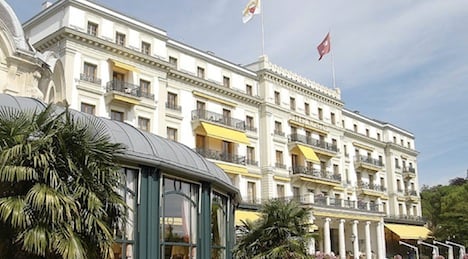 The three-day FT Global Commodities Summit, being held for the second year at the Beau Rivage Palace hotel in Ouchy, brings together traders, bankers and executives from natural resources groups.

But on the conference’s opening day militants protesting against commodity speculation marched from the centre of Lausanne to Ouchy, by the shores of Lake Geneva.

Around 800 people participated according to police, while organizers estimated 1,500 people.

The demonstration was peaceful, however some participants later attempted to breach a security perimeter around Beau Rivage Palace, local media reported.

Protestors gathered opposite the police but no confrontations took place, the agency said.

“No to the summit of tight-fisted employers” and “no to commodity dealers” participants in the march shouted, ATS reported.

Among those involved in the march were members of a bicycle “caravan” who are cycling across Switzerland to promote organic, independent and local agriculture.

The demonstrators decried the “pillaging and exploitation of nature and workers”.

“It’s not by accident that this summit is held here,” Jean-Michel Dolivo, from a group called SolidaritéS Vaud is quoted as saying by ATS.

“More than 400 trading companies are headquartered or have offices in Switzerland,” Dolivo said.

His organization maintains that commodity speculation drives up the prices for basic foods and causes corporate grabbing of farmland.

“We are not going to leave in peace these people who are starving others who want to do their business in complete discretion,” Dolivo told those at the rally.