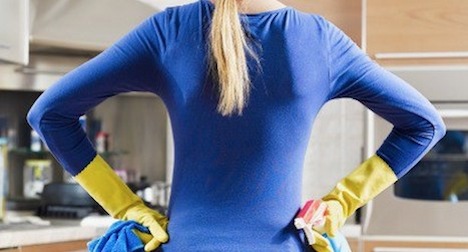 Many of these women face difficulties re-entering the job market after a long period staying at home, says the report compiled following a meeting in Bern with more than 50 training experts in February.

The union is calling for continuing education and professional training to allow such women to find jobs that meet their full potential.

It is also seeking changes to Swiss unemployment insurance laws to allow mothers who have raised families access to benefits.

And it is demanding the creation of bursaries to fund training programs.

Currently such funding is unavailable to students over the age of 35.

Some MPs are already prepared to take action on the issue.

Valérie Pillier Carrard, a Socialist MP from Fribourg and herself the mother of two children, said the lack of training opportunities for housewives was deplorable.

“I find these figures (the numbers of mothers seeking to re-enter the workforce) to be consequential,” Carrard, who has just filed a parliamentary motion seeking action on the issue, told Le Matin.

“We know the economy needs qualified people,” she said.

“My idea is to first of all ask for official statistics, then to take other measures.”

Often women returning to the workforce are forced to accept whatever work they can find, Valérie Borioli Sandoz, an equality policy expert with Travail.Suisse, told Le Matin.

The social regard for women who have stayed at home to raise their children is “practically zero” in a society that glorifies paid work.

“The fact of having worked in the home, looking after children is not at recognized as a professional activity,” Sandoz said.

And yet such women are motivated, flexible and ready for the unexpected, which they know from day-to-day experience, she said.