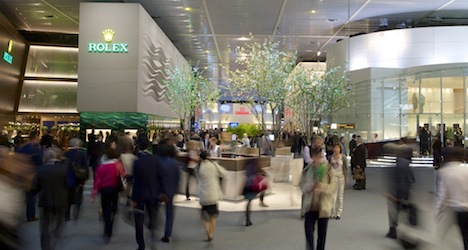 The 41st edition of the fair in the northern city of Basel, which wraps up on May 2nd, has seen top brands striving to outdo one another by doubling and even tripling their previous years' display space.

Baselworld — also devoted to jewelry — is the largest watch trade fair in the world and is expected this year to draw 100,000 visitors.

The tone is set from the get-go by stands such as that of Tag Heuer — part of the stable of French luxury group LVMH — which opted to create a three-story space in the style of a cruise liner with 40 separate areas.

It took a crew of more than 100 seven days to set up the stand, which was designed by Italian architect Ottavio Di Blasi.

Jacquet Droz, a high-end label which is part of the Swatch Group, returned to its roots, replicating the clockwork automatons that made its name when it was founded in the 18th century.

It tapped the talents of present-day craftsman Francois Junod, whose workshop lies in the Jura Mountains, and who was commissioned to produce a life-sized magician which puts on a show every quarter hour, revealing hidden watches.

In another sign of the sector's upbeat mood, the exhibition hall was refurbished completely for this year's edition by big-name Basel architects Herzog & de Meuron, who also designed the bird's-nest style stadium for the Beijing Olympics.

"Despite the economic gloom, we're really optimistic for this year," said Jacques Duchene, head of the exhibitors' committee.

"We have an industry that's surfing the crest of a growth wave," he added.

Swiss watchmakers posted record exports last year of 21.4 billion francs ($23.5 billion), which was nearly 11 percent more than a year earlier, according to their trade federation.

The number of watches exported by Switzerland hit 29.2 million in 2012, giving the country a major share of the 1.2 billion made worldwide, half of them in China.

Baselworld is a key location for watchmakers' product launches.

Swatch, for example, known for its multicoloured plastic watches, unveiled its latest brainchild at the fair: the Sistem 51 mechanical watch.

Its 51 moving parts give it the level of intricacy usually reserved for handcrafted watches — which require lengthy assembly — but it is designed to be produced on an industrial scale and it set to hit the shops in October.

"We all think more complicated, higher price, mechanical watches, sophistication is the name of the game," he said.

"We need this. But we also need innovations that come also from the mass."

Baselworld is about more than setting out the watchmakers' wares.

It's also closely observed for deal-making news and trends.

On Wednesday, for example, Switzerland's Corum said it had been acquired by China Haidian, which already owns the Swiss brand Eterna.

China Haidian said it had acquired 100 percent of Corum for 86 million Swiss francs, and that the deal would open new prospects for the Corum brand worldwide.

Founded in 1955, Corum is known for its gold and jewelled encrusted watches that start from 4,000 francs.

China's rising appetite for luxury goods has been a boon for the sector, but there have been warnings of storm clouds after sales-growth fell sharply there.

For those in the sector, however, there is no cause for alarm.

"In sum, the weakness in China doesn't worry us," said Jean-Claude Biver, head of the Hublot brand, also owned by LVMH.

Sales have continued to rise robustly in Hong Kong, for example, where man mainland Chinese travel to buy their luxury goods. And Chinese tourists are also flocking to Switzerland to snap up watches.

"The Chinese market is in a consolidation phase which for the moment is affecting high-end watches above all," Biver told AFP.

"But the huge potential of mid-range watches, which is phenomenal, is only at the start of its story," he added, noting that not every customer is after a 50,000-franc watch.