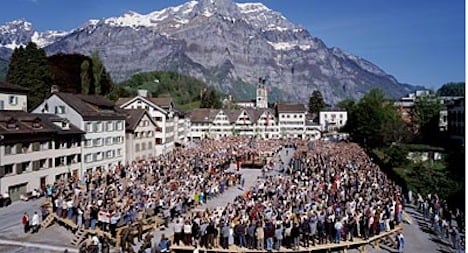 The proposal was backed by the right-wing Swiss People’s Party who argued that the local dialect is an important part of people’s identity in Glarus, a German-speaking canton with a population of around 40,000 people.

However, a majority at the Landsgemeinde, as the open-air meeting of voters in the town of Glarus is known, rejected the idea, the SDA news agency reported.

Most voters agreed that the current teaching system, which involves a mixture of spoken Swiss-German dialect and both spoken and written “High German”, is satisfactory.

Among other issues decided at the assembly, voters agreed to raise the tax on dividends to 35 from 20 percent, SDA reported.

To offset the increase, the gathering agreed to drop the tax rate on company earnings to eight from nine percent.

More than 6,000 people attended the Landsgemeinde, regarded as one of the oldest forms of direct democracy in the world.

Dating back to the Middle Ages, the system was once common in the rural mountain cantons of Switzerland.

But Glarus is now one of only two cantons in the country (the other is Appenzell Innerrhoden) to continue the meetings.

The Landsgemeinde is regarded as the “supreme legislative body” in the canton.

In its decisions on Sunday, though, it followed the advice of the cantonal government and parliament.

Members of the cantonal government of Geneva and Swiss federal cabinet minister Johann Schneider-Ammann (economy minister) were among the special guests at this year’s edition.