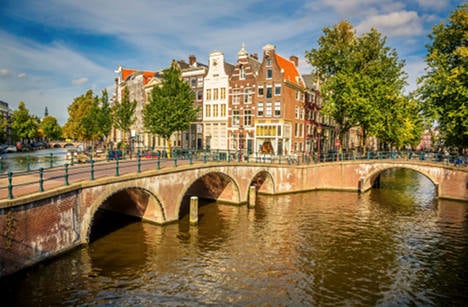 1. Run rings round the canals
The picture postcard of the Dutch capital is captured by 100 kilometres of waterways, which stretch under 1,550 bridges and encircle 90 islands. It has been 400 years since construction began on the city’s famous canal ring, now a UNESCO World Heritage Site. Parades and festival are among various activities will be organised on and around the canals throughout 2013.

2. Meet the masters
Stare a real Rembrandt in the eye at the Rijksmuseum, the national museum that houses works of art from all over the world. The main building has opened its doors again after a decade's worth of renovation and has 8,000 objects of art and history back on display. The collection is most famous for the masterpiece paintings by the country’s Golden Age artists including Rembrandt, Frans Hals, and Johannes Vermeer

3. Catch a jubilee concert
Celebrating its 125-year anniversary, the Concertgebouw or city concert hall is considered one of the world’s finest thanks to its finely tuned acoustics. Built in 1888, it is a classical powerhouse but has played host to the likes of Led Zeppelin, The Who and Pink Floyd in its time. Over 700,000 music lovers visit annually and this year the venue has a perfectly pitched programme of jubilee concerts, with a number of live performances screened at locations around Amsterdam.

4. Tune into the city orchestra
Cited as one of the world’s small select group of top symphony orchestras, the resident Concertgebouw orchestra was given royal approval by Queen Beatrix in 1988. The ensemble dates back to the same year as the concert hall and is celebrating its 125th anniversary with a 48-concert tour covering six continents. The orchestra has over 1,000 recordings to its credit and is complementing its 2013 schedule by performing 70 concerts at home in the Netherlands.

5. Holiday in the African savannah
Yes, even in Amsterdam. Wildebeest, zebras and gazelles can be found roaming around the Artis Royal Zoo, situated in the heart of city. You won’t find a greener spot in Amsterdam; the country’s oldest zoo has the more nature per square metre than anywhere else in the capital. Home to 750 species of animals and 300 species of trees, this year the zoo really is blooming, with thousands of flowers planted especially to commemorate its 175th anniversary.

6. Head to Haarlem with Hals
To mark the centenary year of the Frans Hals museum, 50 key masterpieces by the Dutch Golden Age painter are being exhibited. The museum is situated in the city of Haarlem, 20 kilometres west of Amsterdam, where Hals lived most of his life.  Born in 1582, he is famed for his portraits and although he died penniless in 1666, a Hals original that once hung in Elizabeth Taylor’s living room sold at auction in 2012 for $2 million.

7. Revel in Russian relations
From trading partners to royal liaisons, the Netherlands and Russia have long shared special relations. So inspired was Tsar Peter the Great with the canals of Amsterdam, that construction began on the present day St. Petersburg to build a replica. The bond between the two cities was cemented in 2009 by the opening of the Hermitage Amsterdam, a satellite of St Petersburg´s famous museum, where a special exhibition dedicated to Peter the Great will run throughout 2013.

8. Get a glimpse of Van Gogh
One of the Netherlands’ most famous sons, the works of Vincent Van Gogh are back on display following the reopening of the Netherlands most visited museum, situated at Museumplein. “One must spoil as many canvases as one succeeds with,” the young Van Gogh is reported to have said and succeed he did. The museum hosts the largest Van Gogh collection in the world, with 200 paintings, 400 drawings, and 700 letters. This year the museum is celebrating its 40th anniversary.

9. For an easy-to-find cultural fix
An architectural centrepiece gracing the Keizersgracht canal, the Felix Meritis building is in it 225th year. Its foundations began in promoting arts and science yet between 1888 and 1988 it served as a printing house, the headquarters of the Dutch Communist Party and a theatre. Its name translates to ‘happy through merit’ and it finally returned to its roots in 1988 when it was opened once again as an institution, now focusing as an independent European centre for art, culture and science.