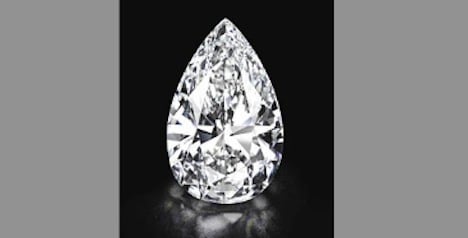 The diamond now known as the "Winston Legacy." Photo: Christie's

Christie's representative Raul Kadakia told reporters after the sale that Harry Winston was the buyer of the diamond that smashed the previous auction-price record for a diamond in its category by more than $10 million.
"Twenty-three million francs! Your last chance! Twenty-three million, sold!" shouted Francois Curiel, the head of Christie's jewellery division, referring to the $23.5-million price before tax and commission, and clinching the deal in front of some 150 people gathered for the auction at a luxury Geneva hotel.
As the first ever buyer of the new diamond, Harry Winston had the priviledge of naming it and decided to call it the "Winston Legacy," Kadakia said.

He noted this was the diamond dealer's first major purchase since it was snapped up by the world's leading watchmaker for $1 billion in March.
Switzerland's Swatch Group, most known for its brightly coloured plastic watches, has been eagerly expanding its luxury offerings.

Wednesday's sparkling purchase should perhaps especially tickle the group's chairwoman Nayla Hayek, who was named chief executive of Harry Winston earlier this month.
"Diamonds are still a girl's best friend," she said following the January announcement that Swatch would buy the company, referring to the famous Marilyn Monroe song that mentions Harry Winston, from the 1953 musical film "Gentlemen Prefer Blondes".
The American Institute of Gemology has handed the Harry Legacy the top colourless grade "D" and the best clarity grade, "flawless", which is characterized by its "absolute symmetry", according to Christie's.
The diamond, sold at the auction by a diamond merchant, was 236 carats in the rough when it was extracted from the Jwaneng mine in Botswana, before it was meticulously sculpted for 21 months, Christie's said.
Wednesday's sale marked the highest price ever paid for a flawless colourless diamond at auction, although Christie's had hoped the new diamond — the largest of its kind to ever go under the hammer — would rake in $30 million.
The previous auction-price record-holder in the category was the 84.37-carat Chloe round diamond, snapped up at a Sotheby's auction in Geneva in 2007 by Guess Jeans founder Georges Marciano for $16.2 million.
In the "colourless, flawless" category, the reigning world champion in terms of size is meanwhile the Cullinan Diamond, a gem weighing 530.2 carats that is part of the British crown jewels.
Last November, Christie's sold the 76-carat Archduke Joseph Diamond, in the initially flawless category a notch below flawless, on auction in Geneva for $21.5 million.
And in May 2011, a heart-shaped 56-carat diamond was auctioned off for $10.9 million.
The Elizabeth Taylor Diamond, which is in the same D-colour category but weighs in at only 33.19 carats, was meanwhile sold for $8.8 million on auction in New York in December 2011.
While Swatch's low-end plastic watches are perhaps its most recognisable, the Swiss company operates in every price range, from the Flik Flak kid's watches to prestigious timepieces under for instance the Breguet brand which can cost more than one million Swiss francs a piece.
Swatch's acquisition of Harry Winston — one of the world's most prestigious diamond dealers — comes after it ended a partnership with luxury jeweller Tiffany & Co in September 2011.