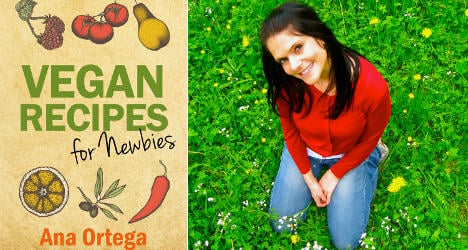 How did you end up in Switzerland?

Well, it didn’t happen all of a sudden. I’m originally from Malaga in southern Spain, where I completed my studies in mass media and journalism while working in Business Development. I then moved to London to explore new career opportunities and became a freelance writer. There I completed a master’s degree in International Finance and was introduced to the world of collective investment, which fascinated me.

Last spring, the company I was working for transferred me to Switzerland. I loved the country already and I’m the kind of person who needs and welcomes challenges, so I was happy to come here.

Now I live in Zumikon, just outside Zurich, and work as a Funds Specialist in the finance industry. In April I published my first book – a vegan cookbook called ‘Vegan Recipes for Newbies’.

What made you go from finance to food-writing?

In all honesty, it was an idea born under the shower.

For me a work-life balance is fundamental. These days everyone is expected to do so much more in the workplace that we end up neglecting ourselves.

Last October, I became vegan for health reasons and began researching veganism. I was overwhelmed by the variety of food available, and found that eating vegan made me feel much more active and energetic. So I decided to put together a simple cookbook for anyone looking to embrace a healthy lifestyle with or without cooking skills.

The response has been simply amazing! It’s been a very rewarding experience and encourages me to continue writing.

In Switzerland, It’s particularly popular among Swiss women and expats – perhaps because summer is approaching and they want to stay in shape.

‘Vegan Recipes for Newbies’ has also opened the door to many other opportunities. For instance, I’m now organizing a vegan cookery course – taught in English – in Zurich, which is designed for business professionals and students with limited cooking skills and/or time. My aim is to show them how to have fun with cooking and to produce healthy food that doesn’t require much preparation time.

I’m actually about to publish my second book, 'Taxi, Life stories', a novel about a young entrepreneur in her 30s who collects anecdotes and life experiences through a unique social group: European taxi drivers.

How are vegans perceived in Switzerland?

It’s easy to be a vegan in Switzerland because of the healthy and nutritional lifestyle here. As long as you avoid the Swiss cheese and the chocolate, you’ll find there are plenty of vegan options in restaurants.

I’m also very fortunate to be surrounded by nature, farms, and a wealth of organic products. Most people associate veganism with limitation when in fact it’s the opposite.

Was it difficult to integrate as an expat here?

Not at all. It was a very smooth transition. People think that Swiss people are very introverted – and perhaps they can be, but personally I’ve had the reverse experience and have made some great friends.

Do you notice any differences between the working cultures you’ve experienced?

In Switzerland, preparation is key, particularly when you’re in an office environment or meeting with clients. So it’s particularly important to do your research first.

Business in Switzerland often has a social element, so it’s important to get to know your clients well and at least learn the basics of Swiss German such as “hello” and “how are you?”

Also, unlike in London, where I noticed a lot of business was conducted over the phone, the Swiss prefer to do business face-to-face.

Do you have any advice for expats looking for a job in Switzerland?

Expats moving to Switzerland from big cities like London can appear quite cold and unapproachable to the Swiss. That’s something expats should be wary of.

And even if you have a high-powered job that takes up most of your time, it’s also important to be true to your creative self. Believe me; it will boost your productivity to a completely new level! I like the popular saying: ‘Do what you love and love what you do’. Ana Ortega is the author of 'Vegan Recipes for Newbies' which can be purchased here.