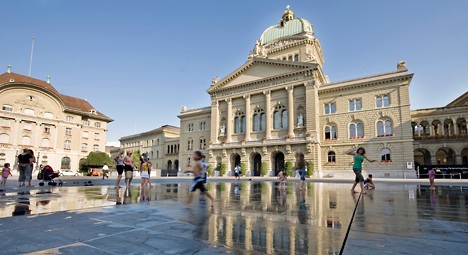 With 100 votes opposed and 90 votes in favour, the National Council (house of representatives) decided to freeze its urgent handling of the settlement agreed upon last week until it has more information about the conditions demanded by Washington, the ATS news agency reported.
The deal, dismissed as an "American dictate" by the Swiss press, has sparked a national outcry.
Washington has repeatedly accused Swiss banks of complicity in tax evasion, since they hold billions of dollars belonging to American citizens that are not declared to US tax authorities.
The United States has agreed to halt any prosecutions of the Swiss banks in question, but the conditions have yet to be divulged due to a confidentiality clause.
The deal would enable Swiss banks to circumvent some elements of the country's cherished bank secrecy laws and turn over key information to US authorities
It also requires parliamentary approval, but members of parliament cannot amend the content.
Swiss Finance Minister Eveline Widmer-Schlumpf acknowledged last week that US authorities had proposed a "unilateral offer, one that we couldn't negotiate."
Washington has said the conditions will only be disclosed once the deal has received a green light from parliament.
How much the banks will have to pay to win legal closure is not yet known, but Swiss media have reported that the overall figure could hit 10 billion francs ($10.5 billion).
"This is a surrender," the populist Swiss People's Party thundered while the Socialist Party was behind the initiative calling for parliament to refuse urgent debate on the deal.
Widmer-Schlumpf has said it is imperative that parliament give its stamp of approval to the deal during its June session to ensure that it can go into effect on July 1st.