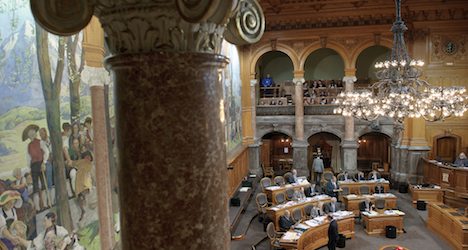 The upper and lower houses of Swiss parliament are taking different approaches on the tax agreement in the midst of controversy in advanced nations about tax evasion and low tax bills by some big companies.
A total of 26 members of the upper house, or council of states, voted in favour of the controversial "Lex USA" bill, which aims to lift Switzerland's long-sacrosanct banking secrecy for one year for Swiss accounts held by Americans.
Eighteen lawmakers opposed the deal proposed by the United States, which has angered many in Switzerland by insisting it is non-negotiable and must be in force by July 1st.
The Council of States, which voted 24-15 in favour last week in an initial debate, was unswayed by a lower house refusal to hold the emergency vote needed to have the deal in place by Washington's deadline.
On Tuesday, 126 members of the lower house, or National Council, refused to consider the deal, while 67 were in favour.
Wednesday's upper house decision puts the ball squarely in the National Council's court, and it is set to hold a new debate later Wednesday, leaving the accord on a knife-edge.
The deal is seen as crucial if Swiss banks are to escape the threat of a raft of lawsuits in the United States on charges of abetting tax evasion — with massive fines the price of legal peace — as well as being barred from the big and profitable American market.
The banking sector has said it wants to draw a line under an issue which has poisoned ties with the United States.
On Tuesday, a summit of Group of Eight (G8) leaders in Northern Ireland made progress in trying to curb cross-border tax evasion and corporate tax "optimization".
Swiss banks are believed to hold billions of dollars belonging to American citizens who have not declared these assets to US tax authorities.
The take-it-or-leave-it settlement proposed by Washington was approved by the Swiss federal government at the end of May.
But parliamentary approval is needed for a one-year waiver of Swiss banking secrecy rules.
Without it, the banks would break Swiss law if they give US authorities the names of American clients and of employees that handled their assets.
With the global economic crisis putting tax havens into sharp focus — notably at this week's summit of the G8 major economies — Switzerland has opted to defend banking secrecy while giving ground in some areas.
Currently, US investigators have to make formal requests for legal assistance concerning specific tax-dodgers, a procedure Washington sees as cumbersome.