Fribourg is a mostly French-speaking city, which lies on the edge of Switzerland's majority German-speaking region.

But the event drew participants from across the country.

The parade mixed a party atmosphere with calls to ward off homophobia in a country seen as relatively tolerant and where anti-gay messages have little political traction.

Monnier said that verbal abuse is still all too common against lesbians, gays, bisexuals and transsexuals, while homophobic motives are not necessarily flagged up when the justice system handles cases of violence, in part because victims are wary of spotlighting them when they file a complaint.

The parade also attracted several dozen protesters including traditionally-garbed priests and young members of the ultra-Catholic Saint Pius X movement, who stationed themselves among onlookers along the route.

The same organisation, which also turned out at the 2012 edition in the northern city of Délémont, in the canton of Jura, said it had written to the archbishop of Fribourg to complain about the Church's failure to speak out against the "unnatural" parade.

With police on hand to keep the protesters and participants apart, the religious activists faced a barrage of catcalls from the marchers.

Monnier said it was the only incident as the march wound its way through Fribourg for two hours. 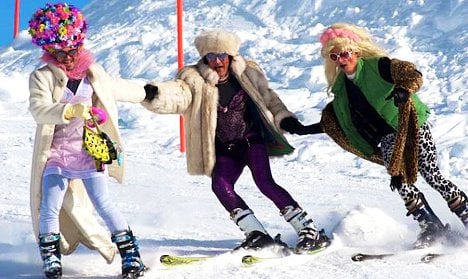