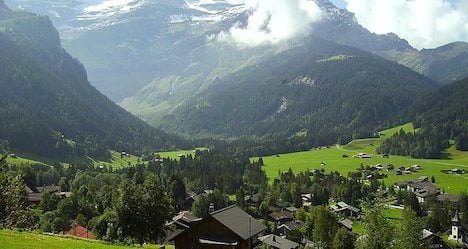 Les Diablerets, a mountain resort town in the canton of Vaud at an altitude of 1,200 metres, was among the communities most affected by the heavy downpour that lasted around half an hour.

Basements of numerous buildings were flooded, including the tourist office.

“There is between 20 and 30 centimetres in the cellar," an employee of the office is quoted saying by 20 Minutes online.

Small streams burst their banks and the town’s main road was flooded.

Pierre-Olivier Gaudard, a Vaud cantonal police spokesman, told the ATS news agency that no roads were closed as a result of the rain.

“There is just debris to clear,” he said.

“There is more fear than harm.”

The storm followed a hail and rain storm a day earlier that struck Saxon, a village in the canton of Valais, devastating apricot orchards and flooding basements of 20 buildings.

The extremely localized storm damaged around two-third of the apricots grown in the village, ATS reported.

While not all of them were destroyed, those damaged will not be able to be sold as top quality fruits, and many will be used for juice, jams and eau de vie, the news agency said.