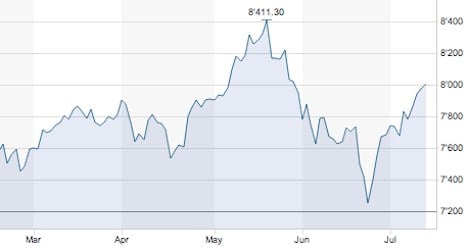 The index, which tracks the stocks of the 50 biggest Swiss companies, jumped above 8,030 in early trading before falling back to around 8,010 by 11am.

Bernanke’s comments, noting that unemployment remained high in the US and that a stimulus was still needed to boost the economy, were welcomed by Swiss investors.

The SMI peaked this year at 8,411 on May 22nd before falling back to 7,249 on June 24th, virtually wiping out all gains for the year before steadily moving upward again.

The index has risen from a low of 4,695 points in August 2011, reflecting general optimism about the Swiss economy, which has defied weaknesses in neighbouring European countries.

For Swiss exporters, there is positive news, with currency markets driving the dollar higher against the franc, while the Swiss franc has risen against the euro in the past two weeks.

The dollar is increasing against the franc and the euro on expectations the Fed’s loose monetary policy will end before that of the European Central Bank, which has vowed to keep interest lows to aid the EU’s beleaguered economies, Tagesanzeiger reported online.

The US dollar was trading on Thursday morning at just below 97 cents and is expected to hit parity by the end of the year, according to consensus forecasts, the newspaper said.

The euro was trading at 1.24 francs with forecasts that it will reach 1.27 francs over the next year.

Switzerland’s central bank, the Swiss National Bank, has vowed to maintain a floor of 1.20 in a bid to help the country’s exporters, whose biggest market is the European Union.