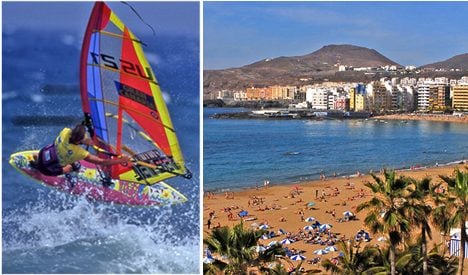 www.grancanaria.com
1. Check out the capital
Las Palmas de Gran Canaria is the largest city of the Canary Islands. Its central square, Parque Santa Catalina, resembles one vast, outdoor café that is buzzing all day and night and central to all of the city’s celebrations. Hop on one of the sightseeing buses that begin their tours here or simply stick around to enjoy the atmosphere with a glass of wine or two.
2. World-class windsurfing
Active holidaymakers will not be disappointed with the wide range of water sports on offer. The island is a world-class destination for windsurfers and the coastal area around Pozo Izquierdo doubles up as a Mecca for enthusiasts. Both trade winds and the energetic sea currents in this area of the island make it a natural home for the annual Windsurfing World Championships.
3. Ride the surf
If you’re at home in the surf, you’ll be in good company along with some of the world’s best surfers and bodyboarders who reside on the island where the World Championships are held. Surfers can feel just as much at home in Gran Canaria as in many parts of California and Australia, thanks to the excellent conditions along the volcanic coastline and great depth, allowing waves to break with brutal energy.
4. Dive the depths
There’s 230km of spectacular coastline where you can scuba dive and discover amazing marine life. The island has a host of diving schools and clubs offering the possibility of signing up to a course or an organised trip. The deep ravines snake their way from the coast to the highest point inland, which also lend themselves to nature activities including climbing, trekking and cycling – the perfect way to find all of the hidden beauty spots.
5. Lounge on the best beaches
The picture-perfect image of Gran Canaria is the home of golden, sandy beaches that stretch over 31 miles. A trip to Canteras Beach (La Playa de las Canteras) is a must due to its great beauty and the pleasant water temperature, making it one of the most important recreation areas for people living in the city. Its waters hide La Barra, a coral reef that calms the waves without isolating the beach from open water.
6. Accompaniment by the Atlantic
Evening entertainment in Las Palmas offers something for every. Dine out on an open-air terrace in Vegueta, which transforms into a melting pot of people eating in the wide range of restaurants, enjoying live music or heading to nightclubs. For something a little bit different, you can attend a classical concert overlooking the Atlantic Ocean. The far north-west edge of Canteras beach is crowned by the Alfredo Kraus Auditorium, one of the city’s emblematic buildings, designed as a space for meetings and musical events.
7. Enjoy the silence
For a slice of tranquillity, head to Ciudad Jardín. Known as the English district, it housed the first British transport company employees who set up bases in the Puerto de la Luz at the end of the 19th century. Despite its city centre location, Ciudad Jardin, is one of the most peaceful areas of the capital of Gran Canaria.
A coffee on the terrace of the a beautiful Pueblo Canario or the lovely Hotel Santa Catalina and a visit to the Néstor museum, dedicated to the modernist painter Néstor Martín Fernández de La Torre, will complete a day’s sightseeing.
8. Shop until you drop
Vegueta is the primitive nucleus of Las Palmas de Gran Canaria. This is the place where the Real de Las Palmas was located and where the island conquest began in 1478. When Vegueta could expand no further, Triana emerged on the other side of the Guiniguada ravine. The central axis of the district is the street bearing its name, a busy commercial boulevard in the city, which is ideal for shopping.
9. Sample the local dishes
You may well be surprised by the distinctive and impressive cuisine of the island. Check out papas arrugadas (potatoes boiled in salt water and served in their jackets) along with mojo picon (spicy sauce) or puchero (beef and pork with vegetables, chorizo, potato and sweet potato). Gourmets will go mad for the unique mountain variety of cheeses, with thistle added at the curd stage – a real must for food enthusiasts to try.
10. 365 days of great weather
The excellent geographic condition of the Island and the springtime climate all year round is why the island is often compared to a ‘miniature continent’. There’s something new to photograph around every corner, from sand dunes to rugged mountains, tropical forests and tranquil valleys. Gran Canaria has a fascinating history, amazing food, spectacular scenery and brilliant water sports. There’s also the opportunity to relax and get away from it all.
Article sponsored by www.grancanaria.com
Url copied to clipboard!