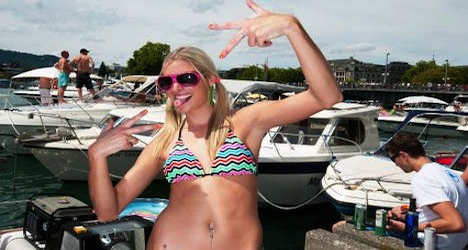 On Friday temperatures reached 34 degrees in the Swiss plateau. And on Saturday they are expected to climb further.

Weather services sounded the alarm, saying ozone levels were also on the rise.

“On Saturday it will be 34 to 36 degrees celsius in the west, and in Valais up to 37 degrees,” Reto Vögeli of MeteoNews told Blick.ch.

“Then on Sunday it will be the same in the east.” With a warm wind blowing the Rhine valley will heat up to 37 degrees.

But from Sunday afternoon a sudden change is expected.

“A cold front will bring widespread storms with the potential to become violent,”

These will first affect western Switzerland, including the Jura region and the Bernese Oberland. From the evening eastern areas will also be affected, with heavy rain in places.

“In some places basements could even be flooded,” the meteorologist told Blick.ch.

In contrast to the weekend, Monday will be a moderate 24 to 26 degrees.

But the hot temperatures are set to return in the course of next week.

The forecast for Switzerland’s national day on August 1st is for very sunny and hot weather.

With the risk of forest fires continuing, a ban on fireworks is possible in some places, the 20 Minuten website said.