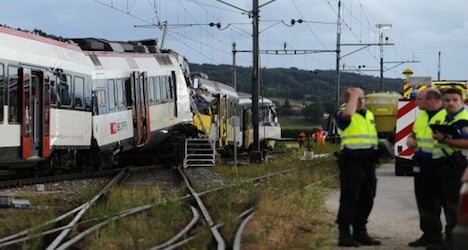 An investigation is underway into the cause of the crash. Photo: AFP
"The investigation focuses on the likelihood that the train travelling from Payerne failed to respect a signal," Jean-Christophe Sauterel, police spokesman for the canton of Vaud, told reporters.
Two trains collided head-on at 6.45pm on Monday just outside the station at Granges-pres-Marnand between the Geneva and Neuchatel lakes in the French-speaking region.

At a news conference on Tuesday morning reported by the Blick newspaper the railway operator SBB and canton of Vaud police gave more details of the collision and its aftermath.

Sauterel said the assumption was that one of the trains had left the station too early, ignoring signals.

The train driver who had died was 24 years old. His family living abroad were receiving counselling.

It could not be ruled out that there were further passengers trapped in the wreckage, Sauterel said.

“We will continue to do all we can to ensure the safety of our passengers,” he said, according to Blick.

The SBB expressed its condolences to the driver's family.

Meyer said he was relieved that many of the injured had been able to leave hospital during the morning.

Rescuers retrieved the body of the driver from one of the crumpled engines early on Tuesday and investigators were surveying the crash site.

"Work is continuing to clear the line completely. Technical investigations will continue over coming days," police said in a statement.

A total of 46 passengers had been on board, all of them Swiss, police said.

One train had been bound for Lausanne, 38 kilometres to the south, while the other was travelling north from the same city.

In total, 26 people were taken to five separate hospitals while those with more minor injuries were treated on site by the emergency services and volunteer medics.

Monday's crash was Switzerland's most serious since one in Zurich in 2003 which injured 45 people.

It came in the wake of the July 24th tragedy in Santiago de Compostela, when a speeding train flew off the rails, killing 79 people. A crash in suburban Paris a week earlier killed seven.