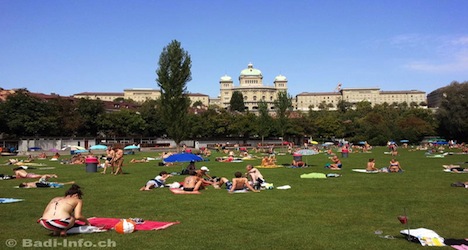 It was a good month for sunbathers. Photo: badi-info.ch

Meteorologists say it was too warm and too dry in many parts of Switzerland, the Swiss news agency SDA reported.

According to weather service, Meteomedia, the month that is coming to a close is the fourth hottest since records began.

The reason is not just the heatwave that hit Switzerland last weekend, when temperatures reached up to 37 degrees Celsius.

Almost every day of the past month has been warmer than average. North of the Alps July was two degrees warmer than the reference year of 1981.

Joachim Schug of Meteomedia said this July was very humid and relatively stormy.

“There were only six days with no storms in Switzerland,” he said.

He said that nationwide 46,075 flashes of lightning had been recorded.

Despite the storms many places were much drier than usual for July.

According to the meteorology service there were 50 to 100 more hours of sunshine than normal, with 200 hours in northern Ticino and the Alps and 350 in northeastern Switzerland.