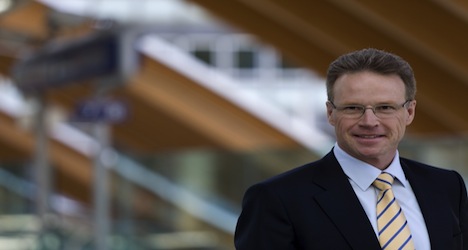 “We have no major safety problem,” Meyer told the Tages-Anzeiger newspaper. “Safety is one of our main goals.”

Monday’s collision near Granges-pres-Marnand in the canton of Vaud left the driver of one of the two trains dead and 25 injured.

The country’s main railway operator has also made negative headlines in recent days as a result of a series of breakdowns in the Zurich S-Bahn network.

Meyer told the paper it was still too early to talk about the lessons that needed to be learned from the fatal train collision. “We first have to clarify the causes of the accident,” he said.

Investigators said on Tuesday a signalling failure or one of the two drivers ignoring a signal was the likeliest cause of the crash.

“I’d like to stress that we are investing 50 million francs in 1,700 safety signals between now and 2016,” Meyer told Tages-Anzeiger.

“But to bring our signaling up to the highest level of the European Train Control System (ETCS) we would need 2 billion francs.”

“Our goal is that by 2035 our networks should be fitted with the ETCS. We are currently installing this safety system on the Gotthard railway line between Mattstetten and Rothrist and in the Lötschberg tunnel,” Meyer said.

The CEO conceded that the signalling system in operation at Granges-pres-Marnand dated from 1958.

Meyer said the SBB had called for an independent assessment of its safety measures and the results were expected in a few months’ time.