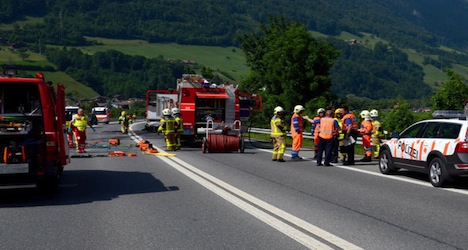 The three as yet unidentified victims were trapped in the burning vehicle.

One person travelling in the other car was seriously hurt, the Obwalden cantonal prosecutor’s office said.

The accident happened on Sunday afternoon as a car heading towards Lucerne on the A8 motorway swerved onto the other side of the road colliding with an oncoming vehicle.

“From a long way off I saw a huge cloud of smoke,” the eyewitness said.

Two adults and two children travelling in the other car suffered injuries and were airlifted to hospital in Lucerne.

“The driver was stuck in the car and had to be cut out,” Jürg Boller of the prosecutor’s office told the paper.