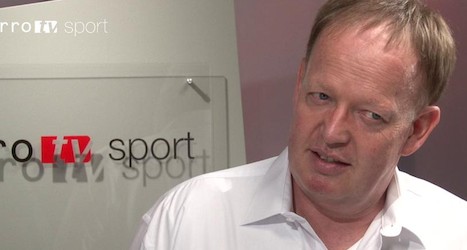 Robert Dill-Bundi being interviewed on RROTV, a local TV station, one year ago. (Screenshot)

The accidents occurred in the middle of the day in the day as Dill-Bundi, winner of a gold medal in the 1980 Moscow Summer Olympics, was driving his BMW in the town, 45 kilometres southeast of Lausanne.

“I was very shocked by what happened,” the 54-year-old Valais resident told Le Matin in a report published on Friday.

“I will be interviewed by police so I can’t make any statement.”

Dill-Bundi was himself injured and taken to hospital where he is expected to spend a couple of days getting treatment, Le Matin said.

In a news release, Vaud cantonal police said a driver from Valais “provoked” two accidents in Aigle on Thursday, without identifying who the driver was.

The motorist was driving on the Route du Golf heading toward the town centre when he ran a red light at an intersection and collided with another vehicle at around 11.40am, police said.

He continued “at a brisk pace” through a roundabout about 100 metres down the road, where his vehicle smashed into the rear end of a car that hurtled into the back of another car, the news release said.

From the result of the impact, one of the two cars collided with a van, police said.

The driver of the car that initiated the crash traversed the roundabout, crossing the island in the middle before his vehicle collided head on with another car, which in turn ran into two other vehicles.

Of the 11 people injured, two were in serious condition although their lives were not in danger, police said.

One of them was transported by helicopter to the university hospital in Lausanne while another was taken by ambulance to the Aigle hospital.

An investigation has been launched into the accident, which took place in the town that is home to the headquarters of the International Cycling Union (UCI), the world governing body for the sport.

Philippe Jaton, spokesman for Vaud cantonal police, said a blood sample was taken from the driver who caused the pile-up to determine whether alcohol was involved, Le Matin reported.

Dill-Bundi, who won a gold medal in the men’s individual pursuit cycling race at the Moscow Olympics, was diagnosed with a malignant brain tumour in 1999.

He subsequently underwent surgery and chemotherapy before receiving “electric” therapy, according to past Swiss media reports.

Using a box with with electric diodes attached to his head the experimental therapy succeeded in shrinking the size of the tumour.

Dill-Bundi's son, Alessandro, told Blick.ch that he believes his father had a seizure.