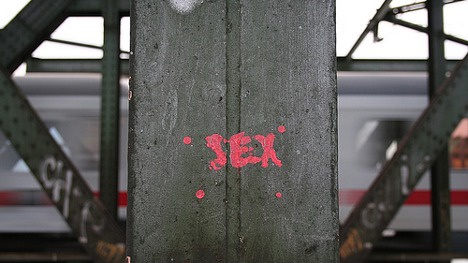 The cathedral city of Cologne established a drive-in brothel in October 2001 with eight rooms, called "sex-huts" or "performance boxes" into which motorists drive with prostitutes, as if in a garage or petrol station.

The site, which served as a model for Zurich, is equipped with an alarm button and toilet facilities.

Sabine Reichert of the SkF has been quoted by German media as saying that the system led to a "considerable decline in violent acts against the women.

Twenty boxes operated for several years but in 2007 they became a nexus of criminal gangs from eastern Europe and were closed in April 2011.

Bonn installed six wood-walled spaces in January 2011 in a parking lot near the city. An official has been quoted as saying that 20-25 prostitutes work there on a regular basis.

Italy has several sex drive-ins, which are used by prostitutes and clients as well as by young couples who are still living at home.

Prostitution is legal in Italy, but solicitation and brothels are not, so while the sites are tolerated, they have sparked opposition from local residents and the Catholic Church

In Pozzuoli, near Naples, two entrepreneurs opened a "Love Park" in May with 32 places for cars separated by blue tarpaulin curtains for privacy.

The facility in a park was shut down by local authorities, re-opened, and has now been closed again. It charged a minimum fee of €5 ($6.70) for two hours, plus €1.5 for each additional hour.

In Crema, near Milan, "Luna Parking" charges five euros an hour and €10 for the entire night. It has 38 open-air garage spaces and curtains for privacy, and reportedly hosts around 30 visits a day.

It too has been shut down several times, including by a former local parish priest who organised prayer vigils in the area.

In Bari, southern Italy, the "Lovely Park" offers 50 spaces with less privacy for €3 an hour. BELGIUM  In Belgium, where prostitution is not legal, but tolerated, the eastern city of Seraing wants to build an pedestrian-only "Eros centre" that would cover 2,000 square metres to provide prostitutes with 34 rooms and a clean and safe environment.

The design includes a discrete police locale and a 4,000 square-metre parking lot, which in theory would be off-limits for sex. NETHERLANDS  In Holland, where "window" prostitution has been legal since 2000, street-walking "Tipplezones" are tolerated in five towns, although Amsterdam closed such a site in late 2003.

Others have also shut down, often due to problems stemming from the use of hard drugs such as heroin.

In the central city of Utrecht, almost 100 so-called "sex house boats" were recently closed, with the city's mayor citing concerns over human trafficking.

In Gröningen and Heerlen they are supervised and provide access to legal aid and free contraceptives, and in some cases walled drive-through corridors have been set up for more discretion.