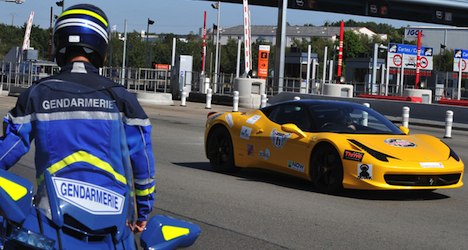 Organized for a second year by Birmingham-based Swordfish Events, the Cannonball 2000 rally starts in the British capital and follows an itinerary to Marbella in the south of Spain with stops in Amsterdam, Cannes and Valencia, as well as the Swiss city.

But the six-day event, featuring high-horsepower racing cars which were set leave from England on Tuesday night, has a reputation for encouraging speeding and other highway infractions.

“During previous editions it is apparent that the participants rarely followed the highway traffic laws and rules,” Vaud cantonal police said in a statement.

“By their behaviour they are liable to put in danger other road users,” police said.

Around 50 cars are involved in the 3,200-kilometre rally, including Aston Martins, Ferraris, Maseratis and Lamborghinis.

The route of the second stage of the rally from Amsterdam to Geneva on Wednesday has not been publicized but police in the cantons of Vaud, Fribourg and Geneva say they are ready to catch any offenders.

Police say they are sharing information and putting fixed and mobile speed radar detectors in place.

Police cars will be patrolling the motorways to guard against serious infractions.

And Swiss border guards will be keeping police informed of cars participating in the rally as they cross into Switzerland, the ATS news agency said.

In cases of infractions, drivers will be pursued and their vehicles will be confiscated if necessary, police added.

According to the Cannonball 2000 website participants pay £6,495 per car to participate in the rally, which covers six nights in five-star hotels, “fine dining”, visits to bars and nightclubs and two nights in Marbella, with a beach barbecue on the final day.

“After Amsterdam, your journey will take you to one of the most luxurious cities in the world — Geneva,” the website says.

“After a lavish party, you’re ready for another exhilarating drive on the iconic Route Napoléon to Cannes.”

The website makes no mention of speed limits or traffic laws.

But organizers encourage people to “live life to the full” with the rally.

“You don’t have to worry about a thing,” it adds, “the Cannonball 2000 team will be on hand to ensure that this is the trip of a lifetime.”

The event is similar to another one called Cannonball Run, which has been running for 10 years in Europe, and involves motorists dashing across the European continent in flashy cars.

Both events are named after American adventurer Erwin "Cannonball" Baker, who set distance records driving across the US and inspired competitions, as well as a comedy film from 1981 starring Burt Reynolds.