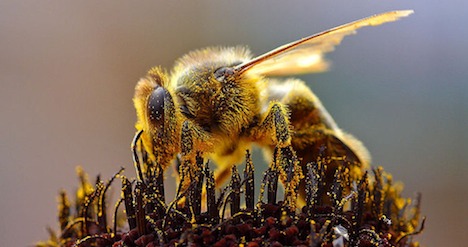 "We would prefer not to take legal action but have no other choice given our firm belief that the Commission wrongly linked thiamethoxam to the decline in bee health," Syngenta chief operating officer John Atkin said in a statement.

The company is bringing the case before the European Court of Justice in Luxembourg, a spokeswoman told AFP.

In a separate announcement on Tuesday, German chemicals group Bayer said it was taking similar legal action against the EC.

The commission announced in May that it was temporarily banning the use of Syngenta's thiamethoxam, which is also sold under the name Cruiser.

The product is used to treat seeds and is applied to the soil or sprayed on bee-attractive plants and cereals.

It simultaneously banned two pesticides produced by Bayer and expanded the ban last month to a fourth pesticide made by another German company, BASF.

Syngenta and the other companies, including Bayer, have insisted their products cannot be blamed for a very sharp decline in the bee population.

Bee numbers have slumped in Europe and the United States in recent years because of a mysterious plague dubbed colony collapse disorder (CCD), which some reports have said has resulted in a loss of more than 40 percent of hives across the United States.

This has stoked fears over future food security, since bees account for 80 percent of plant pollination by insects, which is vital to global food production.

Without the work of bees, many crops would be unable to bear fruit or would have to be pollinated by hand.

But Syngenta insisted on Tuesday that it was being wrongly blamed for the problem.

"The Commission took the decision on the basis of a flawed process, an inaccurate and incomplete assessment by the European Food Safety Authority and without the full support of EU Member States," the company said.

The Commission's decision received support from 15 countries, including France and Germany, but eight others, including Britain, Italy and Hungary voted against the move, while four, including current EU presidency holder Ireland abstained.

Syngenta said the EU suspension was causing deep concern among farmers, who once the two-year-ban takes effect in December will need to replace "an extremely effective, low dose product (with) much less sustainable alternatives."

"Modern products like thiamethoxam are essential to address the challenge of increasing European food production and reducing the reliance on imports," Atkin said.

Instead of going after pesticide makers, Syngenta said, stakeholders should "concentrate on practical solutions to bee health, which most experts agree is damaged by disease, viruses and the loss of habitat and nutrition."