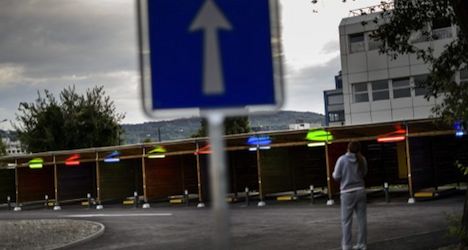 Throngs of reporters but only a handful of sex workers were at the opening of the Zurich site at 7pm.

Television cameras, photographers and journalists jostled to get through the high fence-gate, discreetly displaying the red umbrella icon that designates a regulated sex work area.

A few minutes later, a prostitute sitting in the passenger seat of a caravan arrived, covering her face.

Within the hour, the number or workers had only increased to four, all flatly refusing to have their pictures taken or talk to the media, according to an AFP photographer at the site.

The drive-in, which as darkness fell was bathed in colourful lights, has a track where the sex workers can show off their assets and negotiate a price, and nine so-called "sex boxes" where they and their clients can park and conclude the transaction.

Machines looking like parking metres had been installed at the last minute.

The prostitutes who work here will be required to contribute five francs ($5.40) each night in taxes to help Zurich cover the cost of running the place.

The drive-in, which has room to accommodate around 50 prostitutes, will be open every night from 7pm until 5am and is one of three spaces in the city where prostitutes can work legally.

With the opening of the new site however, Sihlquai, Zurich's most notorious red-light street, where barely-dressed street-walkers have long openly plied their trade to the dismay of residents and businesses, has become off-limits to prostitution.

Before the ban took effect, AFP visited Sihlquai, where police say some 100 women had been working, seeing prostitutes standing on street corners in little more than their underwear, and sometimes even less.

One woman wiggled her naked behind at passing cars as a mother cycled past with her young child and a bag of groceries.

Michael Herzig, director of social services for sex workers in the city, said that since the city could not ban prostitution altogether, "we want to control it in favour of the sex workers and the population".

"Because if we do not control it, organised crime is taking over, and the pimps are taking over," he told AFP.

The drive-in, approved by 52.6 percent of Zurich voters in a March 2012 referendum, is designed to be safer for the sex workers, with security guards on hand to ensure there is only one man in each car that enters as well alarm buttons in each "sex box", on-site doctors and social workers.

The "sex boxes" have been built to make it easy for the passenger but difficult for the driver to get out of the car, said Ursula Kocher, head of the Flora Dora support network for prostitutes which will help operate the new drive-in.

Kocher stressed the dangers of street prostitution, pointing out that clients can drive anywhere with the prostitutes, who have no protection if the situation turns violent.

However, some prostitutes have voiced concern that the strictly controlled environment of the drive-in would scare off their customers, and Zurich police said it remained unclear whether they and their clients would agree to the move.

"That is the big question. We have no idea how many women will show up," police spokesman Mario Cortesi told AFP.

While there was little activity at the opening Monday, the prostitutes and their customers may well be waiting for the media spotlight to go black: after the first hour, all the reporters were asked to leave.

Cortesi said some 1,200 women — mainly from Eastern Europe — registered as sex workers last year in Switzerland's largest city. But since only newcomers to the trade are listed and many likely work illegally, the true number of prostitutes in the city remains unclear.

The city is set to evaluate the project after it has been operating for three months.