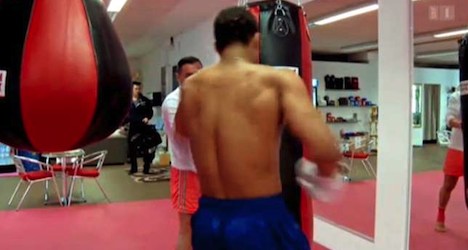 The sum was reported on Tuesday by the Blick newspaper, which was critical of the programme while following up on revelations from a SRF television show on Sunday.

The youth, known as Carlos, has a history of offences “that fill a folder”, going back to when he was nine, including robbery, weapons possession, drug use, assaults and — two years ago — a knife attack, the public affairs programme “Reporter” revealed.

Carlos stabbed another teenager, a Turkish citizen, so hard that the victim only survived by good luck, according to the TV show.

The rehabilitation programme he received was shown as an example of how offenders are dealt with by the Zurich cantonal youth advocate’s office, said representative Ueli Gürber, who was interviewed by SRF.

Blick said that the canton of Zurich had paid a total of 960,000 francs to look after Carlos, including payment for a social worker who lives with him, a lawyer and his boxing coach.

The therapy he is receiving comes after stints in juvenile detention and treatment in a psychiatric hospital failed to deal with his violent tendencies, Marcel Riesen, head of the youth advocate’s office informed the newspaper.

“I can understand that the case has sparked outrage in the population,” Riesen said.

However, in some cases it is worthwhile “to invest more to prevent further offences and consequential costs”.

Riesen said Carlos is required to meet a daily routine and must clean and help in the training centre where he is receiving his boxing lessons.

If he does not follow the rules he risks being returned to detention, he informed Blick.