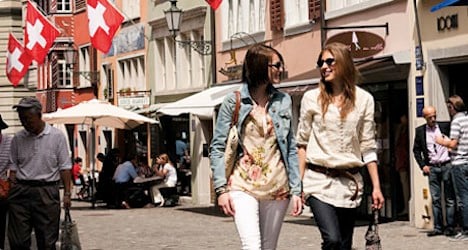 The increase beat the expectations of analysts polled by the AWP financial agency, who expected the country''s gross domestic product to grow between zero and 0.4 percent.

As in recent quarters, the Swiss economy in the April to June period expanded on robust private consumption, which was up 0.7 percent during the quarter, according to numbers from Switzerland's State Secretariat for Economic Affairs (Seco).

And for the first time in a year, investments in machinery and equipment also jumped higher, rising by 2.9 percent.

However, that growth was offset by a slight 0.3-percent drop in construction investments, which in recent years have been a major driver of economic growth in Switzerland.

The trade balance also did not work to non-EU-member Switzerland's advantage, as its imports grew by 1.4 percent, clearly outpacing its exports, which fell 0.9 percent.

The central bank has been containing a rise of the Swiss franc, driven by money seeking safety from the eurozone debt crisis, by intervening on the foreign exchange market.