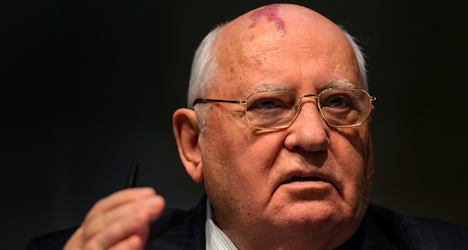 The G20 summit, which starts in Russia on Thursday, comes with many analysts describing US-Russia relations as at their lowest ebb since Gorbachev helped end the Cold War two decades ago.

No official bilateral meeting is planned between Obama and Putin at the summit, but a White House official on Wednesday said the two are expected "to have an opportunity to speak on the margins" of the G20 meetings.

"I urge the president of the United States to take a very responsible stance on this problem, and I hope that the meeting between him and President Putin will take place," Gorbachev said in an interview with AFP and Tribune de Genève in Geneva, where he was marking the 20th anniversary of his Green Cross environmental foundation.

"There is an opportunity in this very severe situation to find a way out and to move towards a solution including an international conference on Syria, a solution that should certainly be found without circumventing the United Nations," the Nobel Peace Prize winner added.

While Washington and Moscow insist they both aim to get the warring parties to the table, Syria's ally Russia has fiercely opposed Western attempts to bring President Bashar al-Assad to heel.

Washington has lamented Moscow's decision to block any UN Security Council action to censure Assad or to use military action against his regime.

Western claims that Syrian forces used chemical weapons against civilians last month have sharpened the debate, but Putin on Wednesday demanded "convincing" proof of the claims and warned against US "aggression" against Syria.

Gorbachev, who has locked horns with Putin in the past on domestic policy, said Moscow's position on Syria was "quite constructive".

Syria's civil war, which broke out in 2011, has claimed more than 100,000 lives, displaced millions and raised the spectre of a spillover of conflict into neighbouring nations.

Gorbachev, 82, said the international community must be level-headed.

"I think that we've seen situations in the past that were more dangerous and where we were nevertheless able to find a solution and to find a way out," he said.

"A lot will depend on the permanent members of the UN Security Council.

"They need to show the Cold War is over, that they are able to work together," he said.

Gorbachev took a jab at France, a vocal supporter of intervention in Syria.

"I was surprised that France, instead of supporting an international conference, is taking its current position on Syria," he said.

"I think that France will have to change its position."

The potential involvement of Syria's ally Iran in peace talks has been a major bone of contention for the West, but Gorbachev said it would be essential.

"I believe that we should engage Iran, involve Iran increasingly, in the search for international solutions to problems, certainly including this one," he said.