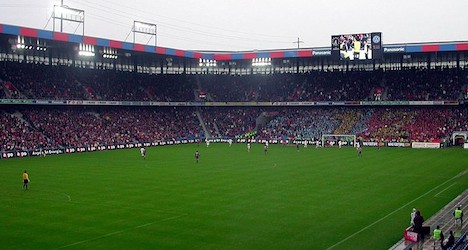 With the September 12th deadline for bids looming, the Swiss Football Association said that it had picked Basel and its St. Jakob-Park stadium as a potential venue.

Since the quadrennial European football championships were launched in 1960 they have always been hosted by single nations or jointly by a pair of countries — Poland and Ukraine hosted Euro 2012, for example.

But the sport's European governing body, UEFA, decided that after Euro 2016 in France the next edition will be spread across 13 countries, with one match city per host nation.

Peter Gillieron, boss of the Swiss Football Association, said it would be hard to rate Basel's chances until the names of all its rivals were announced.

Switzerland hosted Euro 2008 along with neighbouring Austria, with St. Jakob-Park the venue for three group matches, two quarter-finals and one semi-final.

Gillieron said that could be an advantage because the tournament organizers were widely praised, but also warned that it was a possible sticking point given that the Swiss had a turn in the spotlight so recently.

Besides having hosted Euro 2008 matches, the city is also relatively well-known among European fans as the home of Swiss powerhouses FC Basel, who last season made it to the semi-finals of the Europa League, where they lost to Chelsea.

A point in Basel's favour may also be its location in northern Switzerland, on the banks of the River Rhine next to France and Germany, and plugged into key European road, rail and air networks.

Germany, which hosted Euro 1988 and the 2006 World Cup, has already entered the Euro 2020 fray, with Munich its candidate city.

Under the rules set by UEFA for Euro 2020, bid cities have two options.

They can either pitch to host three group matches and a last-16 or quarter-final game, or the two semi-finals and final.

In the first case, the candidate city needs 60,000-seater stadium, and in the second a stadium capable of seating at least 70,000, with Munich's Allianz Arena meeting both criteria.

The 38,512-seater St. Jakob-Park was able to enter the race because UEFA have decided to make an exception for up to two match venues for the group stage and last-16, provided they have a capacity of at least 30,000.

UEFA are scheduled to name the 13 hosts in September 2014.