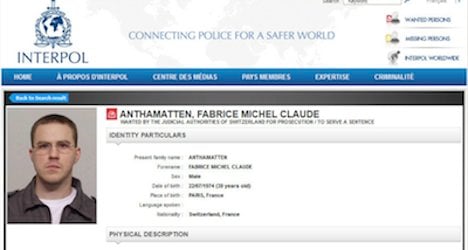 A three-nation manhunt continued for suspected killer Fabrice Anthamatten, on the run since Thursday's fatal outing, with forces in Switzerland and neighbouring France and Germany on alert and an Interpol arrest warrant issued.

"We've crossed a line," she told the Sunday newspaper Schweiz am Sonntag.

Chaaban said she aimed to push for a referendum to create a centralised, life-long register of sex offenders, who would remain on the list even after having served their sentence.

Plebiscites are the bedrock of Swiss direct democracy, and in 2004 voters backed a law crafted by Chaaban to put violent sex offenders behind bars for life.

Switzerland is a federal republic where justice and police affairs are run by its 26 cantons, the equivalent of US states.

Beat Villiger, deputy head of the Swiss cantonal justice and police association, told the SonntagsBlick newspaper that the rules needed a shake-up, with only men being allowed to accompany sex offenders on day release.

Morel, 34 and the mother of an eight-month old child, had been alone with Anthamatten onThursday.

An experienced therapist at a Geneva detention facility, she was taking him to a local horse-riding centre as part of his treatment, after a positive report on a previous outing on September 3rd.

Police found her body Friday in a wood near the centre.

French and Swiss citizen Anthamatten, 39, was serving 15 years for a rape committed in France while on parole in Switzerland, where he had been sentenced to five years in another case.

French justice authorities had allowed him to be transferred to a Swiss jail.