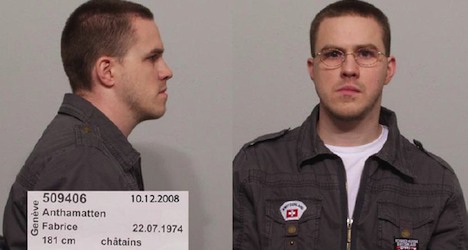 An international warrant was sought for the arrest of the convicted rapist following the killing of Adeline Morel, a 34-year-old sociotherapist on Thursday.

Anthamatten, a citizen of France and Switzerland, was serving two sentences totalling 20 years for raping women at knifepoint separately in Geneva and neighbouring France.

Morel was conducting him to an equestrian centre in Bellevue, a municipality northeast of the city of Geneva, as part of therapy designed to help the prisoner better integrate into society after his sentence is served.

The pair never arrived at the centre and Morel’s body was found in a bag in the woods nearby.

Police tracked Anthamatten to Basel and across the border into Germany, where he eluded capture.

Interpol issued a warrant for his arrest, saying that he should be considered as dangerous.

Polish police caught him driving the white Citröen used by Morel to escort him from the prison toward the equestrian centre, justice officials said.

Swiss authorities are seeking to have Anthamatten extradited to Geneva where he faces charges of murder, confinement and theft.